I bought some new Running gear because it's always good to look the part. I bought one jacket, trainers, a running belt, a hat and a sports bra.
Firstly I'll start with the thing I loved the most. I love the running shoes. Before I bought them I researched what would be best for me, as I tend to run on pavements and the brand of Shoe I would be buying, I needed a good pair of trainers that were decently priced. I ended up buying the Saucony Swerve.

Universal Tips on How to Promote Your…
MICRO BUSINESSES
Fashion blogging: Lesson learnt+ Pers…
SEO Trends and Vitals for 2021 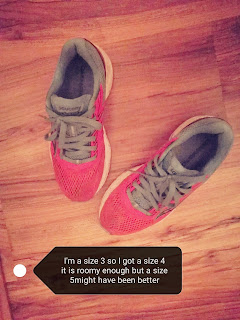 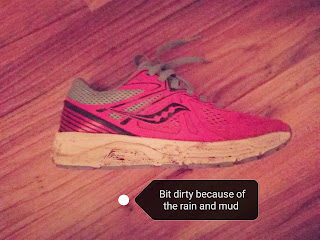 It was £44.99 originally £89.99 which is a normal price for trainers.
Pros:
-feels comfortable on the feet
-has seriously helped with my shin splits and ankle injuries
-feet feel lightweight
P. S that's why I invested in running shoes because mine were too small for running and they were quite tough to run in which caused me alot of pain. When buying running shoes always buy a bigger size as your feet will swell.  But in another post I'll talk about minimal running shoes which is called barefoot running.
Cons
-it's not waterproof but I suppose if you need it to be trail shoes might be better?
-they look a bit chunky and running shoes tend to be bright and in your face but you have to get used to that I suppose.
Running trainers in red and blue
These are the exact ones I have
I would say the running jacket is the second best thing I bought. It was only £14.99 originally £34.99. I got a size medium because I like to wear it a bit baggy but it's up to you what size, the style is quite loose anyway so S probably wouldn't be super tight. 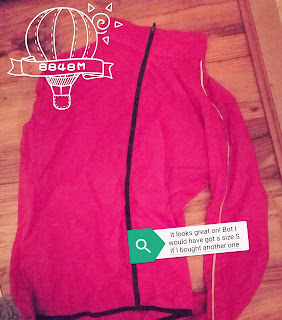 First of all:
- I love the colour they had lots of different colours so whatever colour makes you happy! I bought red because I just like red
-It's a nice thin material and it's waterproof and it has a pocket on the back of the jacket.
-It goes up to the neck which is good for me so I can cover my neck.
-It makes me look like a runner
Cons:
-It's not warm but for running it doesn't really need to be if it's cold I wear a jumper underneath.
-It doesn't have a hood, a detachable hood would have been useful.
Peachy colour running jacket
I couldn't find the red one it might be out of stock. But it's the exact same one in a different colour.
The running belt I have mixed feelings about. I'll explain why in a bit. It was £11.19 originally £13.99. 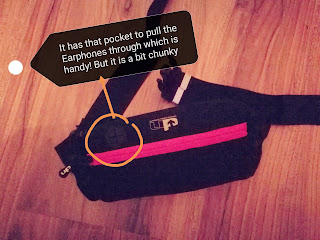 Pros:
-has enough room for phone, keys and money
- you can tighten it and it is soft and comfortable to touch
- although it looks big and awkward to wear when you wear it, it's actually comfortable
Cons:
- this is more of a con for running belts in general, I personally don't like anything that will add additional friction and sweat so although it is lightweight I had to put it on my waist to prevent it moving around and make it quite tight
- the belt is not waterproof which I think it should be, it would have helped.
- it looks a bit weird on, but that's running belts in general, it reminds me of a corset because I have to put it high on my waist to prevent it getting in the way of running
Running belt in black and red
I won't be reviewing the other two items. Mainly because I didn't really like them. The sports bra is comfortable but I didn't get the right size but I also didn't like the clip on I'd prefer to just slip into it.
The hat is pretty much the same as my head cap but it isn't as tight which is fair enough but it's a bit small, I think it should be bigger. It also looks odd when I wear it unless I wear it with a hood because it's thin  but I think if it folded like a wooly hat and it was bigger it would look better. But I did like the colour it was a dark grey colour.
The website itself was really good. I received it in two days and had no issues. I would recommend it for sports gear but I haven't tried a lot of websites out so there may be better. The website was www.sportsshoes.com.
For me personally buying the right gear makes me feel like I'm taking it seriously. I would say the correct shoes are necessary otherwise you will get injuries like I did. Cotton is not the best to be running so when you have money it might be good to invest in breathable materials that will keep you cool. Cotton sticks to you and will keep the sweat which will make you feel slightly damp. Also it could cause chaffing I haven't had this problem in the past but others have.
Its not necessary to buy it all at once but start with the shoes first. I do plan on buying a few more clothing items a long sleeve running top and lightweight pants. Also running clothes vary for weather. I'll do a post on it but you have to slightly adjust your clothing for example in rain you'd need waterproof trousers and jacket. And summer you'd need less layers and perhaps a hat for sun protection.
Anyway if you don't want to run long distances or you don't plan on taking your running further than just keeping fit you could just get the shoes and that's it or even try minimal running which is basically trainers which are quite thin but still protect your feet, but allows your feet to naturally hit the ground and makes your feet do more of the work than the shoe.
Anyway I hope that helped! I'll be doing a hiking post soon about mount Snowdonia and the Four Falls. And also minimal running. Hope it helped!