ABU DHABI- A LAID BACK ADVENTURE

Hello. Hope you all are doing well. Do read the previous blog to know how I started off my journey, my adventures in scintillating Dubai and things that will leave an imprint in my life. But continuing further with this vacation, on Day 5th we bid adieu to Hotel Grand Excelsior and Dubai and headed on to the the capital of United Arab Emirates- Abu Dhabi.

Well all might be wondering that even though tourism is highest in Dubai and all the crazy technology resides there, why Abu Dhabi is the capital? We had the same thoughts in our mind and the simple answer to that is- Trading. All the major trading activities takes place at Abu Dhabi as well as it occupies the maximum area of the country of UAE, therefore making Abu Dhabi the capital.

The difference between the two places is the state of mind of their respective rulers. The ruler of Dubai believes in being upfront and catering to the needs of everyone by making it the place for tourists in the world whereas the ruler of Abu Dhabi believes in taking calculated measures and keeping their culture upfront.
The thing that brought up immense respect within me for the country is the fact they don't believe in the concept of borders between states. There are just two different things you will notice when Dubai ends and Abu Dhabi begins, 1. The roads turn brown with white side lines and 2. Instead of two lights on the street lamp post you will notice 6 lights. It is a great way of showing the difference while keeping the integrity intact.
After completing the journey of 2 hours from Dubai-Abu Dhabi we reached the most beautiful, religious creation and that is the Sheikh Zayed Mosque. 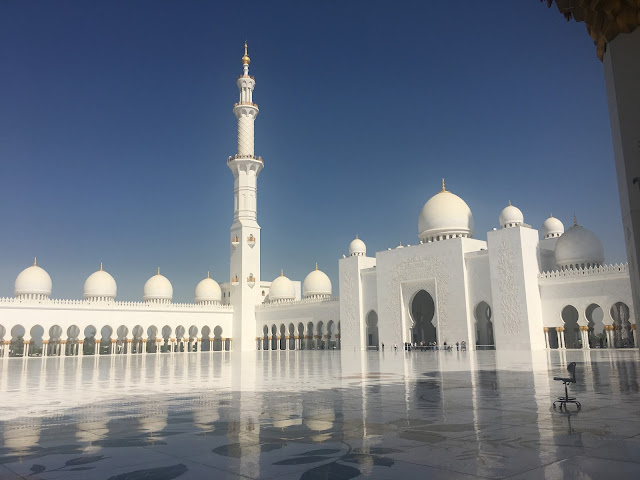 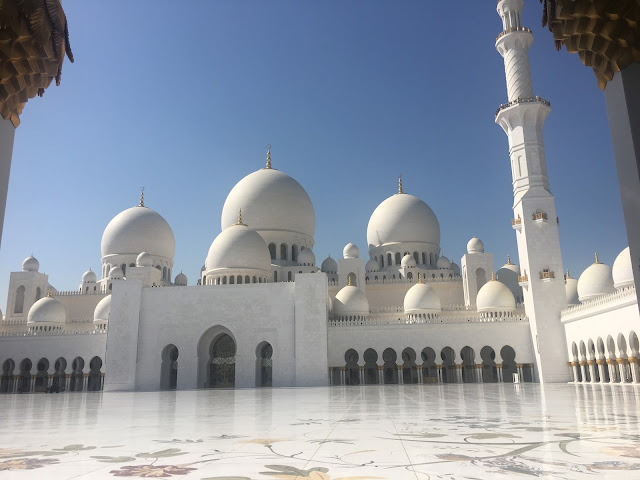 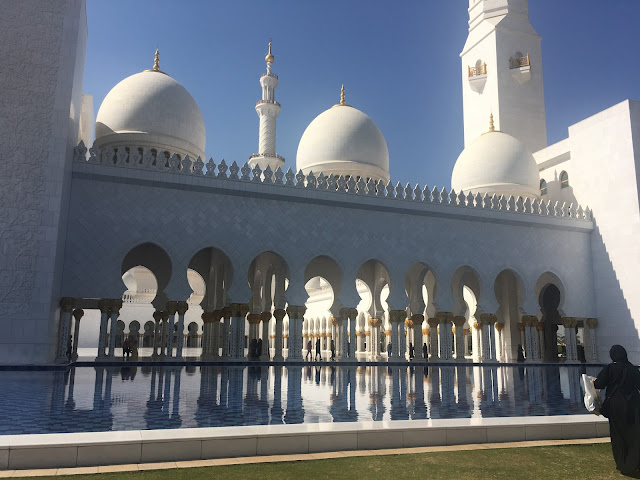 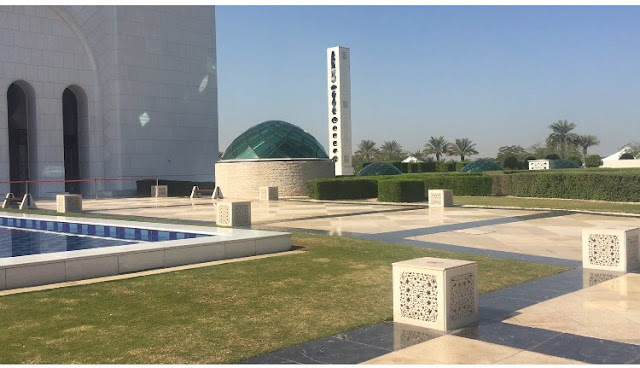 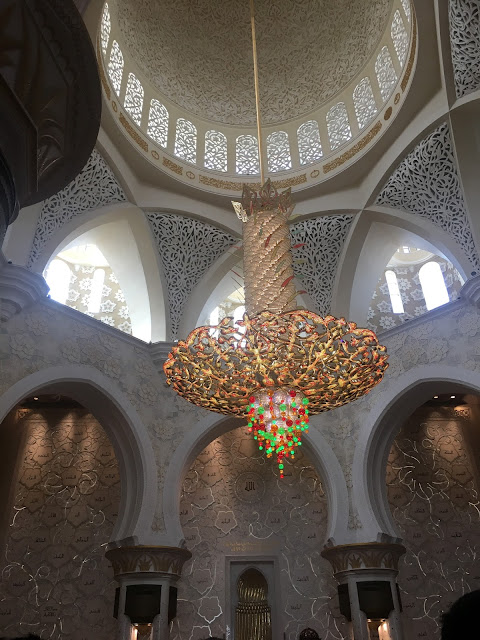 It is the only mosque which allows women to enter and be the spectator of all things gorgeous. Made in honor of the ruler's father himself, this mosque is a calm, relaxing adventure on it's own. There is a certain dress code which is to be followed by women and men.
Just after stepping into the mosque I was already in awe by the intricate designs, the detailed art work and in short by everything present within. The chandelier is the biggest one I have ever seen and the carpet laid beneath our feet in the prayer room is the longest one ever made. Can you believe the fact that it had been brought in two helicopters and then sewn back in the mosque? 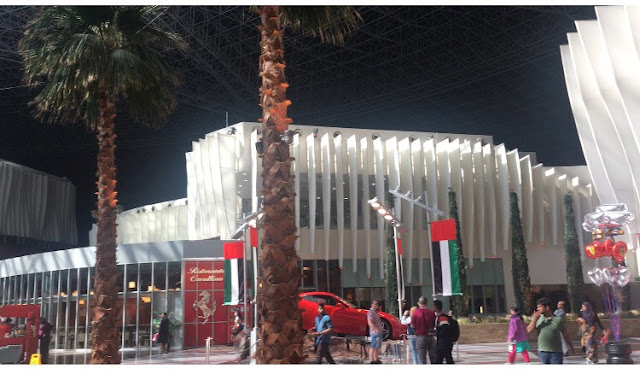 After experiencing this phenomenon, we headed on to an actual adventure theme park- Ferrari World. I had planned to avoid all the dangerous rides and just settle down for the family rides but obviously that didn't happen. As I reached there, my adrenaline levels were high as the Himalayas and I wanted to ride the world's fastest roller coaster. My mother couldn't do anything about that and was a mere spectator with her heart in her mouth. I wanted my first ever roller coaster ride to be the best one. And I can proudly say that I didn't scream one bit and the ride was definitely worth it. It completed the entire course in about 1 minute at the speed of 240 km/hr. WOW!! 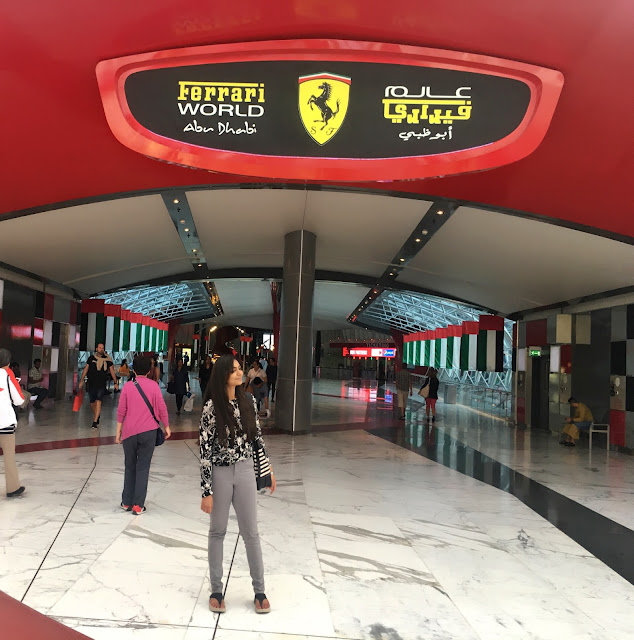 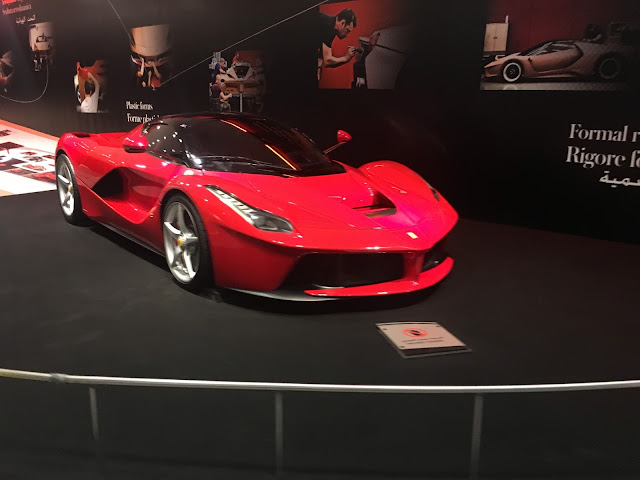 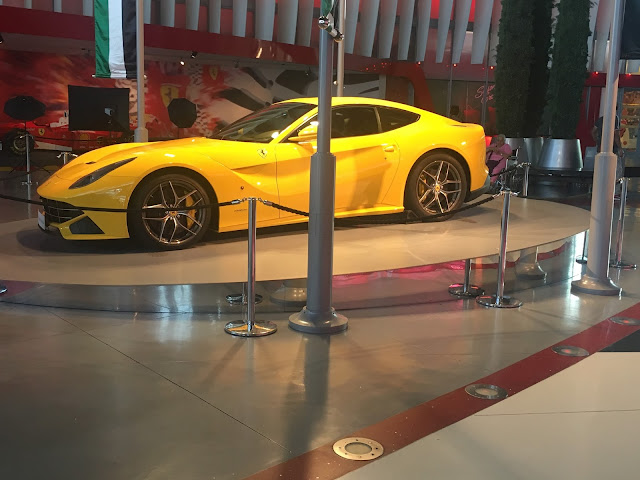 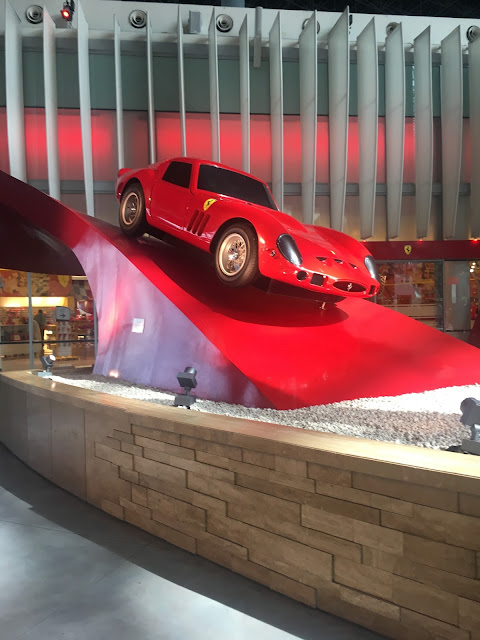 Later we headed on to the simple, family friendly rides which gives you a fun experience along with knowledge about the history of Ferrari. This place is the one for car junkies especially Ferrari lovers.
I didn't even realize how the time passed by and we already were on our way to having the final dinner of the trip. Being all exhausted and almost on the verge on passing out we reached the luxurious Aloft Abu Dhabi. This was nothing like the hotels I have ever been in. The view, the room and the service was top notch.

DAY 6:
This was the final day of our trip. I couldn't help but reminisce all the things I had done in the past 5 days and just grab hold on to this place and never leave. But all good things must come to an end. After leaving Aloft Abu Dhabi, we headed on back to Dubai to visit the Deira City Centre at Dubai to make the most of the shopping festival. 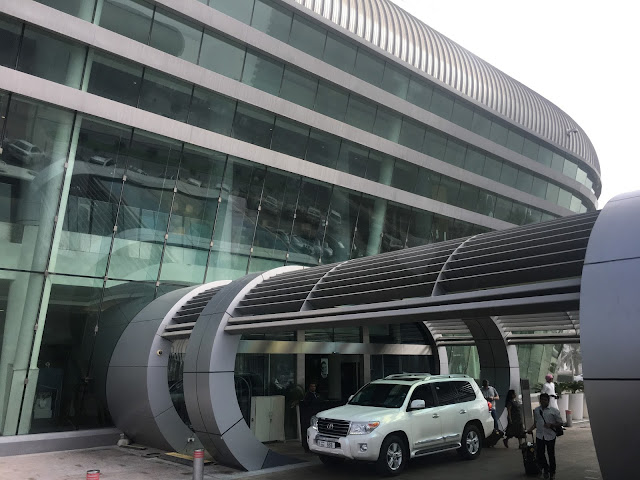 But before reaching our destination we stopped over to the Last exit which is at the border of Dubai- Abu Dhabi. The Last Exit is an american tradition consisting of fast food trucks. This is a great experience for people who have not come across this phenomenon in their own countries. More than the food, the decor and the graffiti attracted me the most. 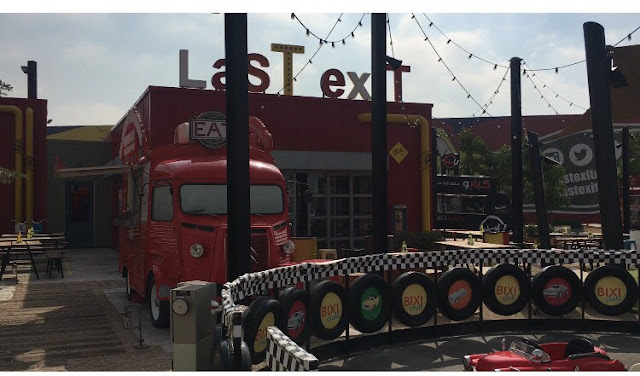 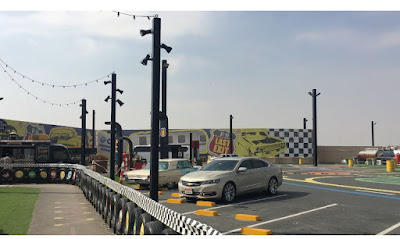 After our 15 minutes stop we continued our journey to the city centre and that is when the all went ballistic with the thought of shopping for 4 hours straight. During sale time 4 hours is practically nothing but we were just glad that we had at least fraction of the time to shop. I shopped all the things I needed and then some more. And then we headed on to the Dubai International Airport to begin our journey home.

Even as of now I can't comprehend the fact that the journey is over. It was overwhelming to the point that I got attached to this place. This has never happened before but the people, culture, roads, every structure which resides in Dubai- Abu Dhabi has grown on me. I never thought in a million years that a simple trip to a place would leave me spell bound and also bring more optimism in my life.

Loktion Boyz – We Are not Done Yet, W…
What’s the World’s Tallest Building?
Manchester City FC History.
Top countries to travel without COVID…
Your Ultimate Travel Guide to Palesti…


This post first appeared on KIRAN DANI, please read the originial post: here
People also like
Loktion Boyz – We Are not Done Yet, We Are Gqomu (Album)
What’s the World’s Tallest Building?
Manchester City FC History.
Top countries to travel without COVID-19 vaccine
Your Ultimate Travel Guide to Palestine: a Misconceived Territory

ABU DHABI- A LAID BACK ADVENTURE