Bill Gates patched things up with Paul Allen, hoped to travel the world with Microsoft co-founder 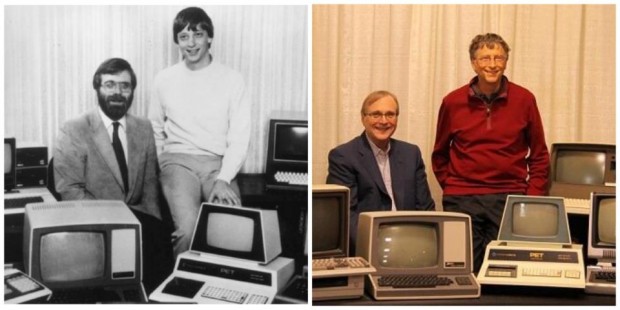 Paul Allen was brutally candid about Bill Gates in his 2011 memoir, “Idea Man,” and the Microsoft co-founders didn’t speak for more than a year after the book came out.

But it turns out they had long since repaired their relationship when Allen died last year. Bill and Melinda Gates dedicate their 2019 annual letter to Allen, describing him as “a brilliant man who loved to share his passion for music, science, the arts, sports, philanthropy, and so much more.”

In an interview with GeekWire, Bill Gates said he had been looking forward to connecting more with Allen as his kids leave the house. “I was going to have more time to hang out with Paul,” Gates said, noting that he had been able to travel with Allen on his yachts to some extent, but was “expecting to do a ton of that once our kids were at college.”

Continue reading for Gates’ comments about Allen and the evolution of their relationship, edited for clarity.

Paul was immensely curious. He read science fiction way more than I did. He was two years ahead of me, and I had done super well on some math stuff, so he was always kind of egging me on, “Hey, can you figure this computer thing out?” It was an amazing friendship, because kids didn’t hang out that much with kids who were two years younger.

We were very much bonded when we did the school schedule together. Paul had gone off to Washington State, and my closest friend who was also involved in the computer thing, Kent Evans, was tragically killed on Mount Rainier. So I went to Paul and said, “Hey, come back and help me.” And that sort of started a partnership that led to Microsoft.

And Paul’s credit for Microsoft was pretty immense because not only did he have this insight about the microprocessor, he literally moved back to Boston. I helped him get a job back there, but he was back there not because he liked the winters or the place he was living, but to basically bug me into dropping out, because he knew he wanted to do the company with me. So he was just back there. Then, finally it looked like we were going to miss the whole thing when the first kit computer came out, and that’s when his argument, “Hey, Bill, drop out!” succeeded, and our first customer took us to Albuquerque, N.M.

So Paul always was curious about things. Paul didn’t like being a manager all that much. During the Microsoft days, I narrowed my interest very much to software. So  when Paul took a bunch of guys to go to the Shuttle launch, I was like, “Hey, wait a minute. We’re supposed to deliver for IBM here. What the heck are you doing?”

He always was wide-ranging in his thinking and reading. If you go into his office, there would just be magazines, kind of messy, but it represented his broad interest. And even after Microsoft, he was funding lots of different things in the tech area like Starwave, that ended up being the ESPN website. Some of them were more a dead-end, but they were pointing in the right direction for things. So he always looked far afield. He always had wanted to find some new and different thing, always a little bit ahead of his time with the stuff he was doing.

It’s kind of strange [that he’s no longer here] because we always would kind of touch base on, “Hey, there’s this cool movie I saw,” or “Here is some new technical thing.” “Do we think this one’s going to work out or not?”

Paul always was worried about his health. This was his third bout of cancer. The first one in 1983 was when he stopped working at Microsoft, and it changed his perspective. He didn’t want to come back and work like I wanted people to work, which actually I was disappointed in, but anyway, it worked out fine. Then he had another bout in 2011, and now.

I actually think he was worried, so it’s awful that he was right, and that was kind of hanging over him quite a bit. His sister is going to carry on a lot of the charitable stuff he did. He was part of The Giving Pledge, so the majority of his wealth will go to charitable things. I’m actually seeing a friend of his this week just to sort of talk more about Paul and the great memories we have.

Read more of Bill Gates’ memories of Paul Allen in this post from October.

Bill Gates patched things up with Paul Allen, hoped to travel the world with Microsoft co-founder