3586Oregon has many Covered bridges, but up until historically recently, none of them were in Multnomah County.

In 1982, though, the county deemed that we deserved to join the party. So a secluded spot was selected where a back road that connected the SE 134th and Foster neighborhood (almost-but-not-quite-Pleasant Valley) to the backside of the then-still-small-and-charming backroad burg of Happy Valley crossed the upper reaches of Johnson Creek.

The road becomes SE Deardorff Road in an unsigned change as you round a sharp bend and dive into the gully there, then you turn a corner ... and there suddenly, is this: 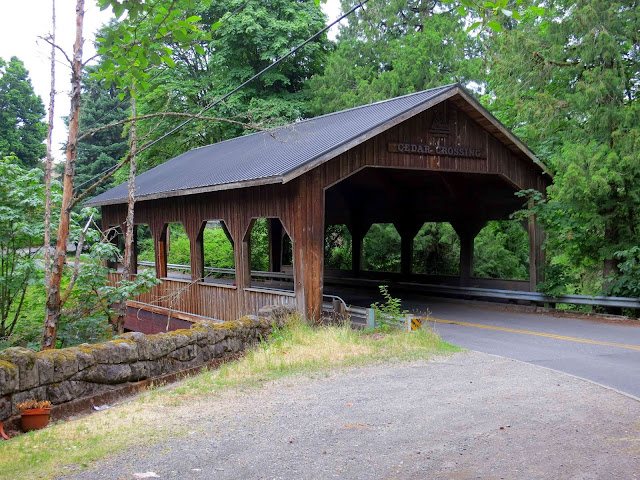 If it seems a little new looking for a covered bridge that's because it is: as I noted, it was built in the 1980s to make up for the fact that Multnomah County had no covered bridges within its boundaries; it was dedicated, in part, by County Executive Don Clark (a political titan back in the day when MultCo only had three commissioners), and its name was selected from a naming contest held amongst David Douglas High students.

This bridge is as East County AF.

It's also pleasant, secluded without being too far out, and there's a turnout on the south side of the bridge where you can chill and listen to the forest and the flowing creek below.