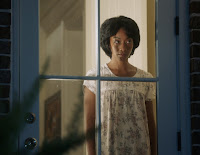 A big unexpected money maker and critical hit (it got a 99% rating on rotten tomatoes) from last Winter is this small scale labor of love horror Film that wears it’s bleeding heart (metaphorically) and influences on its tattered sleeve.
Written and directed by Jordan Peele who is a partner in the successful comedy team of Peele and Key this Movie is not at all what you would expect from an African American comedian and is not for everyone but I can without any reservations say see it especially if you are into horror movies.
It’s influences are wide and varied from the history of horror films, it’s like a bulletin board with tacked up sources such as Rosemary’s Baby, Invasion of the Body Snatchers, Eyes Without a Face, Night of the living dead, Carnival of Souls, The Stepford Wives and even Frankenstein (it’s alive) along with a large bowl of comedy sources especially Abbott and Costello who hover around like a drone with regards to the second banana supporting appearance of a hilarious LilRel Howery as a TSA employee and the best friend of the male lead who is not only funny but wise.
The plot is lean and I have to be careful here not to give any of the secrets, twists and turns away because it is tempting but that would make me one of the bad ones. A nice mixed racial couple Rose and Chris played by Allison Williams of “Girls” fame and a newcomer to me, the British actor Daniel Kaluuya (both of whom are terrific) go on a weekend trip to visit Rose’s parents somewhere deep in some out of the way place.
Chris has some misgivings about this visit since Rose has not told her parents that Chris is black, but so what “it doesn’t matter” she tells him because mom and pop are intellectuals and liberal. Dad is a neurosurgeon and Mom is a psychiatrist with strong belief and leanings in hypnosis.
The first ominous warning we get is as the couple moon and spoon and chit chat while driving and they hit a deer oh dear. Not good especially when they have to deal with a local cop who is suspicious because she is white and he is black and of course he asks him for ID even though Rose was driving.
We are in racial territory now and just where is this movie going I asked as I nervously spilled my cranberry juice all over myself. Note do not drink or eat while watching this movie for a variety of reasons. Mom played by the great Catherine Keener is welcoming but somewhat cold and dad played by Bradley Whitford is over welcoming and condescending and tells Chris he would have voted for Obama a third time if he could. Also around the dinner table is the nasty race baiting brother of Rose along with the black housekeeper and black gardener who are acting strange and take part in a jaw dropping nighttime outdoor scene that is guaranteed to shake you up. I’ll stop here with the plot but I will say that you will never look at a cup of tea the same way after you see this film. One of the best films of the year so far and don’t be surprised to see the film next year at the Oscars.


This post first appeared on Ira Joel Haber-cinemagebooks, please read the originial post: here
People also like
Kim Kardashian Breaks Down in Tears After Kanye West Recovers Sex Tape Footage From Ray J
Theatre Tickets Direct – Frozen The Musical
How And Where to Buy Shiba Inu Coin in Australia in 2022
Does Christianity really say wives submit to your husbands?
Van Dyke Beard Style: 3 Trendy Looks & How to Get Them