Ola driver takes a trip without the passenger, gets epic response

Tags: arre saar cancel kar gaurav ola money ola app ola cab booked uber minute saar
June 30th 2016
View original
18th March 2015, ​I checked the fare estimate from Bangalore Airport to Whitefield, Ola App showed "Rs. 361- Rs. 404". I put Rs.599 in my Ola Money. I got charged Rs.872. This wastwice what it was supposed to be. I was not even carrying cash, then I had to run to the ATM to withdraw cash. I would have booked an Uber had I known that the fare is going to be Rs. 872.
That day I uninstalled my Ola app and pledged over the sun, the moon and the planet earth to never ever travel again.
On the twenty ninth day of June, I wished to embark on journey to Swaminarayan Akshardham temple. I looked for an Uber, but unfortunately had none in vicinity. After denying a hundred times, I gave in to the temptation and installed Ola again.
Ola Micro was 2 minutes away. I went to my home's mandir and did that "bhagwan ne meri sun lee". I added Rs. 400 to Ola Money. I booked cab, waited for 15 minutes, none came. I called the driver.
I: I booked an ola. Kahan ho aap?
Driver: Bhai mai te SHE ENN JEE ki laain me laag raa su
I: Bhaiya kitna time lagega
Driver: bhai bera na time te laagega
I: fir aap Cancel Kar do, mai doosri cab dekh leta hun
Driver: theek hai bhai
After 10 minutes, thankfully I got an Uber and booked it khataak se. :)
As I was picking up my bag, my phone beeped. See picture. "Thanks for travelling with us, Gaurav" - Ola. 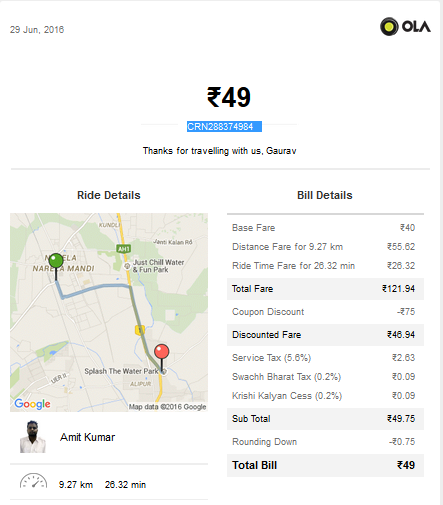 And that moment, my friend, changed my life forever.
I never knew I had dual existence. Like I exist in my home and Ola Cab as well. Is it gaurav from the future/past or ram aur shaam or seeta aur geeta. Am I Schrodinger's cat, I think I am at home but I am in ola cab.
Post reading the ola email, my dog has started having trust issues. He thinks I am a behrupia, trying to steal his bone. He has dug the entire lawn 10 feet deeper to hide it.
Thanks to which my neighbors think that I have murdered his crush Lucy the bitch because she is from a different caste, and burying the body in the lawn. They were on dharna since morning asking for justice until the police beat the hell out of them thinking they were from AAP.
My manager at office has fired me as a jealous colleague informed him I am sowing luxury level arhar ki daal in my dug up lawn while bringing only karela in office lunch.
I have asked Mummy a hundred times, if I have a judwa bhai jo kumbh ke mele me bichhad gya tha. To which she says "bete 7 janm ke paap hote hain 14 ke nahi".
My dad is searching for the other Gaurav, thinking "kya pata wo isse better model ho".
I woke up from a nightmare aghast because I saw my future kid running in langot screaming "mere do do baap, mere do do baap" like in Suniel Shetty's Gopi Kishan.
I could not take this severe identity crisis. I was about to commit suicide, but then the Insurance company called up.
Insurance wale uncle: Guraav Saar, what's up?
I: nothing much. Just suicide.
He: Arre Saar cancel kar do. kilaim nahi milega aapko.
I: Why? Away from earthquake, floods, riots, acts of God, and 140 other non-covered dying options written in 3pt font size on page 337 of the policy, I am dying the perfect death consuming Patanjali Shudh desi cyanide.
He: Arre saar. Aap two people hain, premium one ka dete ho. Ya to ushko bhi saath me lo, ya fir muh me lo rasogulla or cancel karo.
Dear Ola,
Keep all my money.
Meri neend mera chain mujhe lauta do,
aur mujhe doosre Gaurav se mila do.
I am sure none as cute as me ever existed on this planet unless it is another me.
Looking forward to hear from you.
CRN288374984.
I had given one star rating and expressed my concern in the feedback form regarding this fraud but to no avail.
Hope this grabs your attention.
Regards,
Gaurav Arora ( I )

Ola driver takes a trip without the passenger, gets epic response