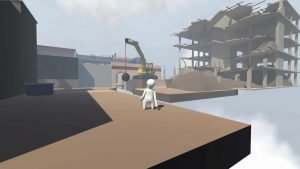 Love it or hate it, mobile gaming has become a phenomenon of its own, reaching hundreds of publishers from the indie sector to the triple-A studious. Latest in joining this trend is Human Fall Flat, a clunky and incredibly comical physics game that many players have fond memories of.

Human Fall Flat originally debuted in 2016 on PC, quickly garnering a wide player base due to its comical and clunky physics. On December 26 of 2017, Human Fall Flat released on the Nintendo Switch, where the game saw its first portable rendition – now, however, Human Fall Flat is becoming even more available for on-the-go players.

In our original review of Human Fall Flat we concluded that: “Fall Flat’s weird controls can frustrate at times, but it still manages to be enjoyable and hilarious throughout.”

For those who can’t contain their excitement, developer No Brakes Games has made Human Fall Flat available for pre-registration on both the IOS and Google Play platforms. Human Fall Flat mobile officially releases on June 26.

This post first appeared on CGMagazine, please read the originial post: here
People also like
Terror Dome: A Short Story (Part 4)
What Is a Heart Attack?
Angels Landing at Zions
LYRICS: Pdot O – Holy Ghost Cry
Weedsday Playlist: Activist Tengku Chanela Jamidah Shares 5 Songs For Your Next Smoke Sesh
How to Help Your Husband Get On Board With Prepping – Part 1
Reverse seared 2" thick Porterhouse Steak
US President To Visit Israel And Occupy Palestinian Territories In His First Regional Tour Since Assume Office