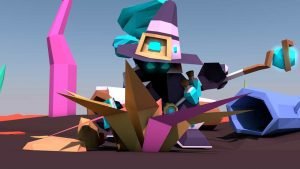 Bowlcut Studios has announced that their top-down wizard brawler MageQuit is leaving Early Access for Steam and Xbox One this fall.

MageQuit is a top-down arena shooter/brawler hybrid where up to ten wizards square off by themselves or in teams. It’s a partially physics-based game that lets you brew up some interesting ways to defeat opponents. At the start of each round, players draft up to seven elemental spells and fight to grow their beards with every kill. After nine rounds, the wizard or warlock with the longest, most luxurious beard is crowned the winner.

“I’ve always liked finding ways to be feisty in games and MageQuit’s playful graphics and unique systems invites players to do that. I’m constantly finding new and ridiculous combinations to pull off,” said Chad Pennings, artist and co-founder of Bowlcut Studios. “We’ve taken the best parts of a MOBA, created a drafting system, and combined them in such a way that MageQuit is both a hilarious party game and a competitive, think-on-your-feet challenge at the same time.”

With eight stages, thirty-five spells, and up to ten players, there are hundreds of different ways a MageQuit match can go, and that’s all before the action starts. You can devise fell magicks and extend your lustrous beard yourself when MageQuit releases on Steam and Xbox One this fall.

This post first appeared on CGMagazine, please read the originial post: here
People also like
Real Madrid beginning to consider life after Casemiro
The Relationship Between NFTs And Celebrities
Is your child smart enough? Here’s how you can teach critical thinking skills to your kid
Puffy Hair for Men: 8 Amazing Fluffy Hairstyles
Scientists finally uncovered the source of the deadly 'Blob' that cooked the Pacific
Everything You Need to Know About a Smile Makeover in Los Angeles