The Dragon Quest Slime Makes For A Fun Switch Controller 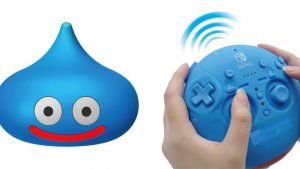 Square Enix is releasing a Dragon Quest slime controller for the Nintendo Switch, much like they did for the PS4 in 2017.

Due out in September, this is a fully-functioning Switch Pro controller. On its flat side, it has triggers, thumbsticks, motion controls, Share and Home buttons, and a D-pad. What makes it stand out is its unusually large size, caused by being the underside of a giant, rubber-coated blue slime from Dragon Quest.

10 of the UK’s best places for fun on…
10 of Britain’s best family-friendly …
Dead Ends in Cryptanalysis #2: Timing…
Cybersecurity secrets that hackers do…
Horse Riding Clothing and Equipment

The controller’s bundle includes a cardboard stand that allows you to dock your Switch in front of a Dragon Quest treasure chest, and also place the iconic Dragon Quest III Hero’s circlet on the slime.

This controller will release in Japan for 10,778 yen (tax included) on September 27th, the same day as Dragon Quest XI Definitive Edition for the Nintendo Switch.

The post The Dragon Quest Slime Makes For A Fun Switch Controller appeared first on CGMagazine.

This post first appeared on CGMagazine, please read the originial post: here
People also like
10 of the UK’s best places for fun on the water
10 of Britain’s best family-friendly hotels – for you and the kids
Dead Ends in Cryptanalysis #2: Timing Side-Channels
Cybersecurity secrets that hackers don’t want you to know in 2021
Horse Riding Clothing and Equipment
Philippine government pressed to put policies to bring GM crops like Vitamin A-rich rice to help solve worsening global hunger, malnutrition
MICRO BUSINESSES

The Dragon Quest Slime Makes For A Fun Switch Controller