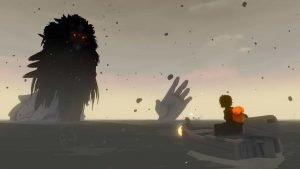 Published under EA’s Originals line, Sea of Solitude is developed by the German Jo-Mei Games, and tells a story of the wandering girl Kay in a world where loneliness and depression turn people into literal monsters. Players must help Kay see below the surface and beyond,dodging other monsters in a flooded city landscape in a story entrenched in darkness and light. As waters rise and fall to reflect her own state of mind, Kay will meet a wide assortment of creatures, learn their stories,and solve challenges to make the world a brighter place.

“Sea of Solitude centers on the essence of loneliness and tugs on the heartstrings of its players by mirroring their own reality. It’s by far the most artistic and personal project I’ve ever created, written during a very emotional time in my life,” said Cornelia Geppert, CEO of Jo-Mei Games. “Designing characters based on emotions was a deeply personal achievement for our team and we’re so excited for players to soon experience Kay’s powerful story of self-discovery and healing.”

The game’s aesthetic was made to stand out amongst the crowd, and its mix of blue waves, colourful buildings, and shifting emotion-based weather make it a striking sight. Kay and the player will journey through this world, solving emotion-based challenges and bringing light, peace and harmony back to the grim setting. Through encounters with many whimsical beasts, Kay will discover why her loneliness has turned her into a monster and what it takes to become human again.

Sea of Solitude will be launching worldwide on July 5th, 2019 for $19.99 USD on PlayStation 4, Xbox One, and the Origin PC client.