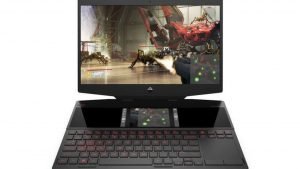 HP, earlier today, during the HP Gaming Festival in Beijing, unveiled to the world, their first ever dual-screen, gaming laptop, the HP OMEN X 2S, amongst a new series of other innovative products within the line.

Now, the OMEN X 2S might sound like a strange proposition for purists, however, HP made sure to construct the laptop in such a way, that it feels like a thoughtful addition, rather than a gimmicky, laptop with a tacked-on second screen. Instead, the design of the X 2S feels like an evolution of Apple’s Touch Bar for the MacBook Pro, which the company introduced in 2016.

Instead of offering a single, interactive touch-based strip, the OMEN X 2S gives users access to a fully fledged 6” touch screen at 1080p, located near where traditionally, the touchpad would be placed. The trackpad instead, can now be found towards the bottom right of the unit. The touchscreen itself can be used to display secondary apps, such as Discord and WhatsApp. Applications such as YouTube and Spotify can comfortably be used on the lower screen, as well, giving users quick and easy access to their music, without needing to alt-tab into the said app.

In terms of specs, the X 2S will feature the latest ninth-generation Intel, i9 chipset, with graphics from Nvidia, with support for high-end cards, such as the Geforce RTX 2080. The OMEN X 2S will ship with upwards of 2TBs of SDD storage and 32GB of DDR4 RAM. To cool the whole system, HP has employed a thermal cooling liquid metal solution.

Finally, in terms of the main display, HP will offer both a 1080p and 4k option, including a later to be released, 144hz model, for ultra-fast response times and G-Sync support. HP has yet to release information regarding the battery life for the dual-screen beast, however, the laptop itself should be available sometime this coming June, starting at $2,100 USD.