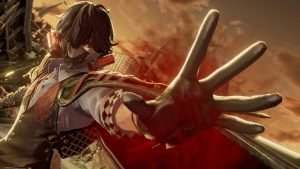 Players can sign up on Namco’s website for a chance to try the game’s first chapter out sometime later this month. Code Vein is releasing on PS4, Xbox One, and PC, though the beta is only for consoles. It seems that, although you can experience offline components in this demo, you will need a PlayStation Plus or Xbox Live subscription to get in on the action. This is slated to be a network test, so you will get the opportunity to play alongside another human player as well as your NPC partner. The contents of the first chapter include a character creator, the tutorial, and a level with a boss that will give players a good slice of the action.

Alongside the beta announcement was a lifted embargo, allowing a number of websites to post previews and in-depth details for the game. It sounds like a melee-focused game with heavy customization opportunities, as you can basically change your class with ease. You will usually have an NPC buddy with you, and you can get another human to help out as well. No competitive multiplayer has been announced.

This marks Code Vein’s emergence from a delay period to tighten up its gameplay. No release date has been announced, but it is slated to hit stores sometime in 2019.

This post first appeared on CGMagazine, please read the originial post: here
People also like
Trivial Proof of the Collatz Conjecture
A Guide to Camping Clothing
The Wonders of Pili Oil
How to Get Rid of Mice – 5 Methods
Short Happiness Quotes From Famous and Unknown People
Office Life – Preview – 2
Excellent Career Options You Can Succeed At While You’re At Home