David S. Goyer Hired On As Writer for Hellraiser Reboot 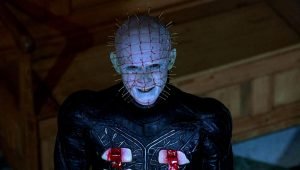 Spyglass Media Group is developing a ‘Hellraiser’ Reboot, and they’ve brought ‘Batman Begins’ and ‘Man of Steel’ screenwriter David S. Goyer on to write and produce.

The past couple of decades have not been kind to the ‘Hellraiser’ franchise under Dimension Films, but Spyglass intends to change that. They will be financing, developing, and fast-tracking a reboot of Clive Barker’s 1987 horror classic to theatres worldwide.

“Clive and I go back more than 30 years together,” stated Spyglass CEO Gary Barber. “For generations, his brilliantly twisted and imaginative Hellraiser haunted the minds of moviegoers with its searing imagery of Pinhead. David is the perfect storyteller to continue Clive’s vision for a new theatrical version of Hellraiser.”

“I’ve been a fan of Clive’s work since the original Books of Blood paperbacks and The Hellbound Heart novella,” said Goyer, whose other credits include writing and directing 2004’s superhero sequel, ‘Blade: Trinity’ and writing 2008’s ‘Jumper’. “Having the chance to reimagine Pinhead and the Cenobites for a new audience is a nightmare-come-true. Gary is a true fan as well and we’re committed to making something dark and visceral.”

No other information about the film was released.

The post David S. Goyer Hired On As Writer for Hellraiser Reboot appeared first on CGMagazine.

David S. Goyer Hired On As Writer for Hellraiser Reboot