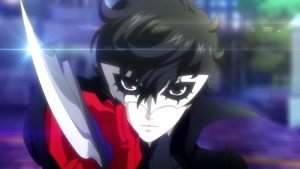 Atlus announced on Thursday that they are publishing a new Persona hack-and-slash game for PS4 and Nintendo Switch titled Persona 5 Scramble: The Phantom Strikers.

The game will be developed by Tecmo Koei’s Omega Force, of Dynasty Warriors fame. Much like those games and Omega Force’s previous licensed endeavours (including The Legend of Zelda, One Piece, Gundam, and Dragon Quest), you will play as familiar characters using large, sweeping combos and area-of-effect attacks against dozens of enemies, all while strategically securing bases around a map. The trailer has shown Joker and his Persona Arsene, with the rest of the Phantom Thieves sure to follow. The “Scramble” in the title is a reference to Shibuya’s famous “scramble” crossing, shown in the trailer, although it is unclear if this name has further meaning beyond the Japanese cultural touchstone.

No release date has been announced for the game, so you’ll have to wait for more details in the future. The day before Scramble was announced, Persona 5: The Royale was detailed as a 2020 PS4 release in the West