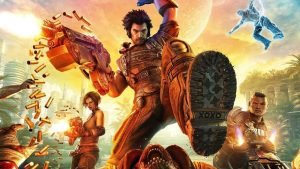 First released back in 2011, Bulletstorm is the outlandish shooter from the team behind Painkiller, People Can Fly. First published by EA, Gearbox have since taken up the reigns of the franchise, releasing the remastered edition titled Bulletstorm: Full Clip Edition, featuring Duke Nukem himself.

“Since the first reveal, when I saw the capabilities of the latest Nintendo console, I knew that we need to get Bulletstorm working on that thing! – said People Can Fly’s CEO – Sebastian Wojciechowski – The whole team was super pumped up on doing that – he adds. The game will include the whole single-player experience in addition with all the DLC released. Yes – Duke’s coming too, and he’ll kick some ass and chew bubblegum as expected!”

Bulletstorm: Duke of Switch Edition was built with the help of Ukraine based Dragon’s Lake studio. Known for working on such games as Alan Wake, The Division and Mass Effect. There is no word on a release date, but Gearbox are promising more news on release as the year goes on.

The post Bulletstorm Hitting The Nintendo Switch This Summer appeared first on CGMagazine.