All the Announcements from PlayStation’s State of Play 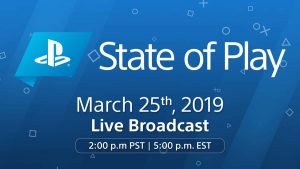 Sony Interactive Entertainment broadcast the first edition of State of Play today, a new stream that is similar to Nintendo’s Direct and Inside Xbox that will feature updates for upcoming games and reveals for all-new ones. And wouldn’t you know it, there were plenty of announcements in this debut episode. Here’s all the information Sony revealed on State of Play:

Microalgae can be a potential feed fo…
Music Profile: Crissi Cochrane - Soul…
5 Easy style hacks every woman should…
“The Friend Who May Not Seem a Friend…

Sony isn’t content to just let one major Marvel character have an exclusive on its platforms. Iron Man VR was announced at the top of the show, and while we don’t know any gameplay or story details, footage shows off Tony Stark flying through the air and blasting at unknown enemies. Iron Man VR is set to come out sometime in 2019, and is being developed by Camoflaj.

The PS4 version of Crash Team Racing Nitro-Fueled will feature some exclusive goodies for the platform. Retro skins for Crash, Coco, and Cortex will be available for use, along with Retro karts and a Retro track. The game will also feature tracks, racers, and karts from Crash Nitro Kart as well. Crash Team Racing Nitro-Fueled launches on June 21, 2019.

No Man’s Sky Beyond Playstation VR

When No Man’s Sky‘s Beyond update launches this summer, it will also bring with it PSVR support. There’s no word yet as to how extensive the VR support will be, and the trailer above only indicates that PSVR support will be included in the game. No Man’s Sky Beyond is a free update for the game that will significantly expand upon its multiplayer functionality.

Sony announced ReadySet Heroes, a new dungeon crawler coming to PS4. It’s a fast-paced multiplayer game where you race against another team in a dungeon crawl to see how far you can go before the two teams duke it out. The further your team is, the stronger you’ll be to fight the other players. It’s set to come out later this year, but no release date has been specified.

Upcoming PSVR title Blood & Truth, originally announced back in 2017, finally has a release date. Releasing on May 28, 2019, Blood & Truth places you in the role of Ryan Marks, an elite special forces soldier who is trying to save his family from a crime lord in London. The trailer shows off what you’ll be doing in the game, which seems to involve a lot of shooting and jumping off buildings and planes.

Newly announced during State of Play is Observation, a sci-fi thriller with a very intriguing premise. Developed by No Code, Observation tasks you with finding out what happened to Dr. Emma Fisher and her crew aboard a space station. The twist is, you play as the station’s artificial intelligence, S.A.M., and must use cameras and the station’s control systems to uncover mysteries. Observation launches on PS4 on May 21, 2019.

Five Nights At Freddy’s is making the move to virtual reality on PlayStation. Five Nights At Freddy’s VR: Help Wanted will task players with surviving classic levels from past games in the series, as well as new levels designed specifically for PSVR. This terrifying title I will absolutely refuse to play is set to launch sometime in Spring 2019.

PixelOpus’ Concrete Genie was heavily showcased during State of Play with a brand new trailer. The protagonist, Ash, must travel around his dreary small town with a magical paintbrush to draw life, literally, back into his surroundings. Of course, a group of bullies and some creepy looking monsters will try to stop you, which means you’ll have to run, jump, and traverse your way through town if you want to use your powers for good. Concrete Genie has a release window of Fall 2019.

Days Gone launches on April 26, 2019, and Sony took the time to showcase a new trailer for the game. Days Gone revolves around bounty hunter Deacon St. John as he attempts to recover and survive following a massive pandemic killed millions of people and turned millions of others into Freakers, zombie-like creatures who can swarm over the player if they’re not too careful.

Lastly, a new trailer for Mortal Kombat 11 showcased the game’s time travel elements as well as confirming three returning favorites for the game’s roster. Jax, Liu Kang, and Kung Lao will all be playable, and in the video above, you can see them fight their past selves in what has got to be the weirdest trailer for the game yet. Mortal Kombat 11 launches on April 23, 2019.

Liked this article and want to read more like it? Check out more by Preston Dosza like his review of Fallout 76, , Bringing Canada to the World of Civilization VI: Gathering Storm, and Preston’s Game of the Year 2018!

The post All the Announcements from PlayStation’s State of Play appeared first on CGMagazine.

All the Announcements from PlayStation’s State of Play