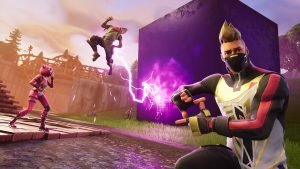 Respawn Entertainment’s Apex Legends has been out for a while now, taking the world by storm with its innovative mechanics and squad-based gameplay.

To combat common frustrations that players have had in the past with squad-based online multiplayer games, Respawn made sure to add some extra functionality to their Battle Royale game in the form of an intuitive ping system.

Even without mics, players can easily communicate with each other and interact with their environment, pointing out weapons, ammo, enemies, and more. In a game that depends on teamwork, the ping system is not only useful, it’s game changing, something Fortnite creator Epic Games has surely taken note of.

By simply tapping left on the d-pad, players can point out areas of interest including weapons, ammo, and enemies. In a game so focused around team-based gameplay, this new feature is going to be a welcome addition for both casual and professional players alike.

It’s clear that Respawn has made quite a big splash in the BR genre, with their features already being implemented into the competition. It’ll be interesting to see if Respawn is able to evolve and update Apex Legends enough to keep it relevant, or whether they’ll buckle under the pressure of the BR king Fortnite.

What’s the point of my life?