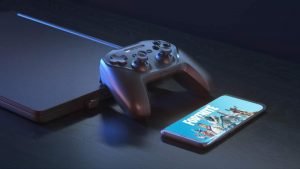 The days of struggling to play Fortnite on mobile are over, thanks to SteelSeries’ new controller integration.

SteelSeries announced today that they are bringing full controller capabilities to Fortnite mobile, as well as PC. This integration includes their Stratus Duo, Stratus XL and Nimbus models, and each one brings something a little different to a gaming setup.

The cheapest of the three is the Nimbus, which for $49.99 is a full-sized, no-frills controller and also the best selling gaming peripheral for iOS and Mac devices. Next is the Stratus XL, which is a Bluetooth compatible controller that is powered by two AA batteries, for 40 hours of battery life. It retails for $59.99. Lastly, at $69.99 is the Stratus Duo, and while it only has a 20-hour battery life it has some other standout features. It has a low latency 2.4GHz wireless connection for Windows gaming as well as Magnetic Hall Effect sensors that keep the triggers precise, with minimal dead zones. It also boasts a sleeker design and micro USB capabilities.

The new controller options are a significant upgrade for mobile Fortnite players.
While the game has been playable on mobile devices for a while, the touch screen control setup has been a major reason why the mobile experience lags behind its console and PC brethren. This is especially impactful since the game is cross-platform between mobile and consoles, and having a similar setup as console gamers is a big win for mobile players looking to be competitive. SteelSeries Chief technical Officer Tino Soelberg also stressed the importance of bringing controller support to Fortnite.

“With the massive success of Fortnite, we want to ensure gamers have the best possible
gaming experience regardless of what platform they’re playing on.”

It’s no secret that Fortnite has been a successful game as it has over 200 million players, and earned over $2.8 billion in 2018 alone. It’s been so popular that other companies are jumping on the battle royale train, including EA and their recently released Apex Legends game.