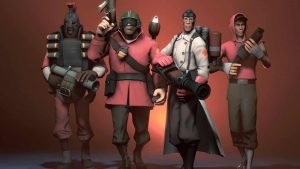 Everyone dies one day, it seems like a saddening, yet cold truth- but not for all of us. After a three year content gap, Team Fortress 2 YouTube star Sketchek has returned from the “grave”, detailing the ins and outs of his thought-out joke in what has turned out to be one of YouTube’s most senseless pranks.

On his YouTube return, Sketchek stated: “About three years ago I announced that I had contracted a non-specific terminal illness, I wanted everyone to know that was a lie. It’s a sick joke. I was never ill, not even a little bit”

His motivation, according to Sketchek himself, not much more than self-guilt. Following the quote above, the YouTuber followed to say:

“You may say I was mentally ill, because I thought it would be fun to convince a lot of people that care about me that I would fucking die but I’ve been feeling really bad about it lately – I can no longer bare the weight of my sins, which is why I’ve decided to cone out with the truth.”

But a “good joke” wasn’t the YouTuber’s only intention behind the act, because according to him, the reason was much deeper: “Back in 2015, I went to Japan, had a good time away from video games, got some much needed Vitamin D and came to the realization that video games had ruined my life, and that was when I decided to shut down the channel, but I also wanted to go out with a bang.”

Sketchek’s sudden “revival” brings some much warranted controversy to the table, specially regarding TF2 itself. According to Variety, upon the apparent death, Valve decided to add a passive ability to the Pyro’s Axtinguisher called “Sketchek’s Bequest.” as a way to honour the once thriving celebrity.

Now with the return of the TF2-player, some have taken it to themselves to call for the remove of the ability, with one YouTube user by the name of chryco4 calling the move worthy of vomit and further stating that “I’m obviously un-subbing and will have little interest in your future content and I hope your name is removed from the description of the Extinguisher and Postal Pummeler ASAP. Have a good one.”

Other YouTube users however, have been quick to forgive Sketchek’s act, with Condescending online Man commenting “We all got pranked by sketchek. Well, whatever I forgive you. Honestly, this just amplifies the fact that you shouldn’t take anything on the internet seriously.”

Sketchek’s return video currently sits at 43,631 views with 2.9k likes and a whopping 1.2k dislikes. Valve has yet to comment on the issue.

The post TF2’s Sketchek Returns To Life 3 Years After Faking Own Death appeared first on CGMagazine.