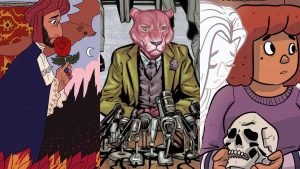 The nominees for the 5th annual Dwayne Mcduffie Award for Diversity in Comics have been revealed, and they fittingly feature a wide array of creators and stories.

The Dwayne Mcduffie Award is presented in order to spotlight the often unheralded creators who make significant contributions to broadening and diversifying the medium of comics. It is named after the late, Dwayne McDuffie, a comics legend and diversity advocate who co-created a number of DC Comics characters, including Static Shock. His award will be presented later this week at C3 (Comic Creator Conference), which is the comic industry’s response to E3, a widely successful video game trade show.

Martha Donato, the president and founder of Mad Event Management LLC, who producing the show, said that she is, “immensely proud of the way the larger community has accepted and embraced the mission of the Dwayne McDuffie Award. To be a small part of a movement for change and acceptance for all creators has been rewarding, to say the least. For the nominees and winners of the award past and future, you exemplify all that he stood for and believed in.”

The award will be given out on  Friday, February 15th on the final night of the C3: Comic Creator Conference. The conference take place at the Long Beach Convention Centre and also serves as a kickoff for Long Beach Comicon, which begins the very next day and features a wide array of comic guests and talent.