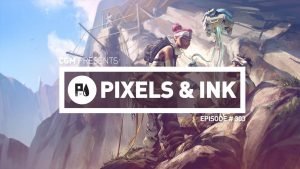 It was an eventful weekend for Titanfall series developer Respawn, as they announced, revealed, and launched their free-to-play Battle Royale game all within 72 hours. The game, titled Apex Legends, takes place in the Titanfall universe 30 years after the events of Titanfall 2. It features a small roster of unique heroes (called Legends) players can select to fulfill specific roles in their three-person teams, giving it a tactical aspect distinctive from other popular Battle Royale games like Fortnite and PLAYERUNKNOWN’S BATTLEGROUNDS.

Brendan, Alex, and Joe each discuss their feelings on this surprising game launch and the potential ethical issues around EA’s promotion of the game through popular streamers and influencers, while Alex and Joe share their initial feelings on Apex Legend’s electrifying gameplay and team-based systems.

The post PIXELS AND INK: EPISODE #303 appeared first on CGMagazine.