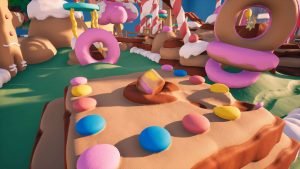 Ever sought a slight glimpse of realism in your puzzle gaming experience on your Nintendo Switch? Well, worry not, as Independent game studio Second Order is here to save the day with a clay-tastic experience in the form of its physics-based puzzler, Claybook.

Originally released on Steam, PlayStation 4 and Xbox One, Claybook is an unique take on puzzle games, offering players the ability to play with clay that for once truly feels like clay. According to developer Second Order, formerly part of Ubisoft’s RedLynx studio, “Every object in on the Claybook playing field looks, feels, acts, reacts, and changes exactly like clay — from structures to gooey clay blobs, to the ground itself.”

According to its developer, Claybook is an experience that aims to bring your inner creativity by shaping and molding everything around you- all as you play from the perspective of an imaginative child sitting in their room, teleporting players back to their own childhood.

“We’re thrilled to bring to Nintendo’s Switch platform, and give creative minds over a new venue for expressing themselves,” said Sami Saarinen, CEO, and Second Order. “Whether players prefer to create extraordinary levels with our extensive library of tools, or simply explore the depths of their problem-solving abilities on their journey through each chapter, we are confident that there will be something for everyone to enjoy.”

Claybook on the Nintendo Switch will offer all the features that fans of the game have come to expect including the co-op and the boundless sandbox modes. Furthermore, Claybook also includes a rewind feature, offering an easier, more set back difficulty for less experienced players.

is a physics-based puzzle game that is currently available on Steam, PlayStation 4 and Xbox One for $14.99. Nintendo Switch debut is expected to launch this March, 2019

The post Claybook Oozes It’s way Onto The Nintendo Switch This March appeared first on CGMagazine.