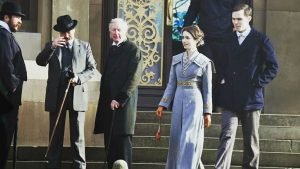 “May it be a light to you in dark places, when all other lights go out.”

― J.R.R. Tolkien, The Fellowship of the Ring

Tolkien, a biopic dedicated to the early life of The Lord of the Rings author J.R.R. Tolkien is slated to be released in the late spring of 2019. Nicholas Hoult of Mad Max: Fury Road fame will be starring as the beloved author, with Finnish director Dome Karukoski helming the film.

While fans of the author are sure to rejoice, there has been no shortage of content released from the late author’s estate in recent years. Tolkien’s son Christopher dedicated a great deal of his professional career to editing and releasing a slew of his father’s unfinished manuscripts. Releases include the 12 volume History of Middle Earth collection, The Silmarillion, Unfinished Tales, as well as 2018’s The Fall of Gondolin.

Lily Collins costars as Tolkien’s wife and long-time creative inspiration Edith Bratt in the film being written by David Gleeson and released by Fox Searchlight.

According to IMDB, the film examines “the formative years of the orphaned author as he finds friendship, love and artistic inspiration among a group of fellow outcasts at school”. Fans are looking forward to possible inclusions such as the author’s early writing career and influences, his experiences in the first World War, and his well-known friendship with The Chronicles of Narnia author C.S. Lewis.