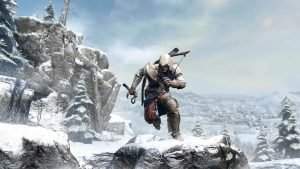 With the runaway success of the Nintendo Switch, it is no wonder that older games are seemingly getting revived for a chance at rebirth on the platform, and as some have been quick to note- it seems as if Ubisoft’s Assassin’s Creed 3 is next on the list.

Thanks to an eagle-eyed Reddit user, Switch fans can now rejoice by the fact that according to some Czech retailers, Assassin’s Creed 3 and Assassin’s Creed 3: Liberation are potentially both making their way to Nintendo’s latest hybrid console.

What is more is that Czech retailers aren’t the first to make the prediction, in fact, according to Eurogamer, Assassin’s Creed 3: Liberation Collection first appeared on German Chain MediaMarkt’s website.

This potential release is bound to release in March, following the already announced PC, PlayStation 4 and Xbox One editions, but unlike those variants, it would not be tied to Assassin’s Creed Odyssey’s season pass (for clear reasons).

Assassin’s Creed 3: Liberation Collection won’t be Nintendo’s first dive into the parkour assassination franchise, in fact, the Wii U received the PS3 and Xbox 360 version of Assassin’s Creed 3 years prior- but due to the consoles’ low overall sales, it wasn’t necessarily claimed a “sales success”.

While Assassin’s Creed 3 isn’t considered the strongest game in the series by many, it to this day contains a heavy cult-following, and the port of this release could lead to further entries of the series on the Nintendo Switch down the line.

The post Assassin’s Creed 3 Potentially Slashing its Way onto the Nintendo Switch appeared first on CGMagazine.

Berkshire Hathaway of Warren Buffet loses $4.3 billion in one day on the plunge of Kraft Heinz