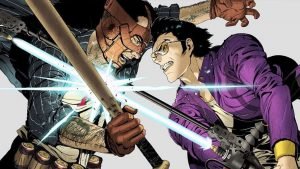 Everyone’s favourite unfiltered, otaku, badass assassin, finally makes his glorious return to the grand stage of gaming in Travis Strikes Again: No More Heroes, exclusively for the Nintendo Switch. Brought to life once again by the talented developers of Grasshopper Manufacture, and the insane directorial mind of Suda 51, Travis Touchdown is back to enact more gruesome acts of video game violence after being missing in action from the industry for nearly a decade. However, this isn’t the same No More Heroes players waggled their Wii remotes furiously for back when mediocre motion controls were considered innovative. Nah, Travis Strikes Again is all about satisfying that growing urge for new indie experiences that Nintendo Switch owners are getting all too familiar with.

Travis Strikes Again: No More Heroes picks up several years after the events of No More Heroes 2: Desperate Struggle. Travis Touchdown has traded-in his murderous lifestyle as the UAA’s top assassin to become a full-blown NEET, intent on living the rest of his middle-aged days in the blissful loneliness of his trailer playing video games. That is until Bad Man jump-starts the plot and attempts to kill Travis as an act of revenge for murdering his only daughter in the franchise’s first entry. Not all goes according to Bad Man’s plan though when both men are suddenly transported into the virtual world of Travis’s super rare home console, the Death Drive Mark II. Now players are tasked with the goal of clearing each of the console’s six launch games alone, or together with a friend cooperatively on the same console. While Bad Man has the sincere hope that clearing these fabled titles of legend will bring his daughter back to life, Travis has a much simpler desire. He just wants to play some rare video games and provide helpful feedback to their developers. Swell guy. 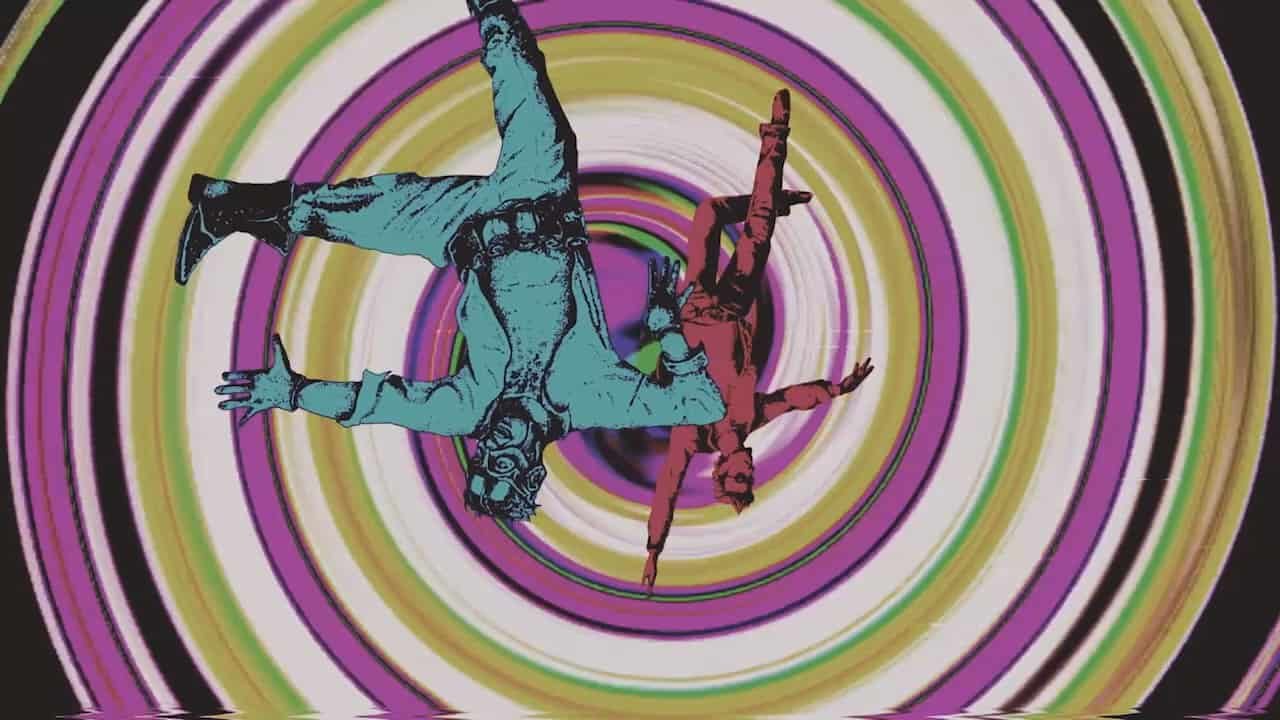 Exposition out of the way, Travis Strikes Again: No More Heroes is easily one of Suda 51’s most self-aware games to date. Not only does it reference countless games and shows, parodying them along it’s 10-hour run time, but now players are even treated to Suda 51 providing them with meaningful life advice, an in-depth ramen blog, and gorgeous 90’s inspired gaming magazine articles about each of the playable games. If it wasn’t obvious already from these absurd statements, Travis Strikes Again oozes with style from top-to-bottom. The visuals, while subdued in places, are excitingly colourful and uniquely vibrant throughout. The late 2000’s comedy remains as crude as ever, and the over the top stupidity of the visual novel narrative is simply a treat to experience for any players of the previous games. Players can even use the in-game currency to outfit Travis and Bad Man with their favourite licensed indie game shirts, similar to one Phil Spencer.

Hard to believe we’re already three paragraphs in and I still haven’t touched on gameplay, eh. Sorry about that. Travis Strikes Again: No More Heroes stays true to its roots as a hack and slash title, but now the combat has been simplified even further so it can be used as the core structure for all of the playable games to work off of. Players can use a mix of light and heavy attacks to destroy the hordes of bug-themed enemies that block their progress, and they can even add new special moves to their arsenal with the help of the 24 Gundam themed skill chips they collect along the way. These skill chips add a much-needed layer of diversity to the combat, and by experimenting with different combinations of chips, players can create new combo chains to devastate their enemies with. Just be sure to shake your joy-con up and down every chance you get to make sure your beam katana is always at full strength. Of course, this mechanic returned reader. It’s pivotal to the No More Heroes experience, but optional if your wrist happens to be worn out from other “activities”. 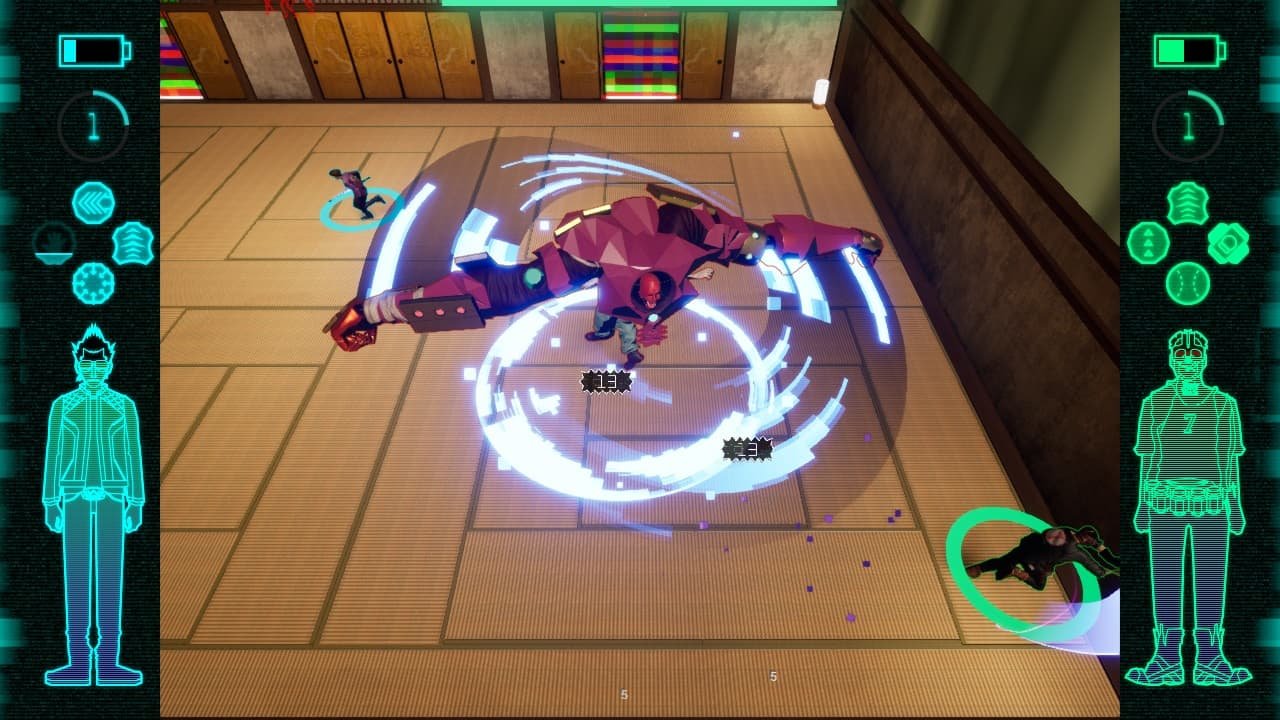 Where Travis Strikes Again: No More Heroes truly shines is in the six co-developed indie games that encapsulate its combat. Travis Strikes Again starts off simple enough by introducing players to the top-down action game, Electric Thunder Tiger II, but before the concept feels worn out, the Death Drive Mark II will thrust them into another game with a different set of challenges. Not only did this work out to make Travis Strikes Again feel brilliantly paced, but it also made me constantly excited as a player to unlock new experiences. Out of the six games available on the Death Drive Mark II, the ones that I enjoyed the most were the puzzle themed, Life is Destroy, and the drag-racer, Golden Dragon GP. Each of them felt like prototypes for games I would love to see fully developed in the future. And if a new game wasn’t rewarding enough for your troubles, then a fun, yet challenging, Furi-styled boss battle at the end of every game will have to suffice until the season’s pass DLC arrives.

Now we’ve come to my final thoughts on Travis Strikes Again: No More Heroes, and as per usual, I’m conflicted what number to slap on it. I mean, I affect the meta score, and if I dip even below an eight, there’s the chance not a single person will buy this game. My decision? There was never a doubt. Travis Strikes Again: No More Heroes is a great game that perfectly captures what I personally love about indie experiences. They have the power to offer truly unique gameplay experiences in the mainstream market, each of them can possess elements that capture the hearts of players worldwide, and when they’re finished, you simply crave more.