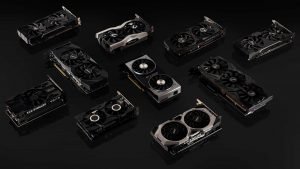 The RTX 2060 is 60 percent faster on current titles than the prior-generation GTX 1060, NVIDIA’s most popular GPU, and beats the gameplay of the GeForce GTX 1070 Ti.(1) With Turing’s RT Cores and Tensor Cores, it can run Battlefield V with ray tracing at 60 frames per second.

The RTX 2060 will be available globally starting Jan. 15 from every major OEM, system builder and graphics card partner.

“Next-gen gaming starts today for tens of millions of gamers everywhere,” said NVIDIA founder and CEO Jensen Huang, who unveiled the RTX 2060 at the start of the CES tradeshow. “Desktop gamers are demanding, and the RTX 2060 sets a new standard — an unbeatable price, extraordinary performance and real-time ray tracing that blurs the distinction between movies and games. This is a great moment for gamers and our industry.”

Power of Turing
The RTX 2060 features a major upgrade of the core streaming multiprocessor to more efficiently handle the compute-heavy workloads of modern games. It supports concurrent execution of floating point and integer operations, adaptive shading technology and a new unified memory architecture with twice the cache of its predecessor. Modern games can utilize these features to achieve up to 2x the performance of the GTX 1060 GPU.

The RTX 2060 comes equipped with 6GB of GDDR6 memory and 240 Tensor Cores that can deliver 52 teraflops of deep learning horsepower, which can improve gaming performance through a feature known as Deep Learning Super Sampling (DLSS).

DLSS leverages a deep neural network to extract multidimensional features of the rendered scene and intelligently combine details from multiple frames to construct a high-quality final image. The result is a clear, crisp image with similar quality as traditional rendering, but with higher performance.

Battlefield V with DLSS Coming Soon
Electronic Arts and DICE will shortly release an update to Battlefield V that will incorporate DLSS support, as well as additional optimizations for real-time ray tracing. Pairing DLSS with ray tracing allows gamers to get both amazing performance and ray-traced image quality.

, an application that makes PC gaming more accessible and provides unique, easy-to-use in-game features such as:

Bundle with Anthem, Battlefield V
For a limited time, gamers buying a qualifying GeForce RTX 2060, or a new desktop PC equipped with the RTX 2060, can choose to receive Anthem or Battlefield V. This bundle promotion is available in most regions around the world.

Availability and Pricing
The RTX 2060 will be available beginning Jan. 15 in systems built by Acer, Alienware, Dell, HP and Lenovo, as well as by leading system builders worldwide.

A stock-clocked RTX 2060 Founders Edition board — designed and built by NVIDIA — will also be available on that date at www.nvidia.com.

About NVIDIA
NVIDIA’s (NASDAQ: NVDA) invention of the GPU in 1999 sparked the growth of the PC gaming market, redefined modern computer graphics and revolutionized parallel computing. More recently, GPU deep learning ignited modern AI — the next era of computing — with the GPU acting as the brain of computers, robots and self-driving cars that can perceive and understand the world. More information at http://nvidianews.nvidia.com/.

Certain statements in this press release including, but not limited to, statements as to: next-gen gaming taking off; the pricing and availability of NVIDIA GeForce RTX 2060, including custom boards and the Founders Edition, and the add-in card providers, system builders, OEMs and graphics card partners offering it; NVIDIA GeForce RTX 2060 with Turing architecture GPUs delivering amazing graphics with ray tracing and AI to tens of millions PC gamers; RTX 2060 delivering new levels of performance and features previously available only in high-end gaming GPUs; the performance, benefits, features and abilities of the RTX 2060, including its speed, gameplay, frame rate, efficiency, support of operations, adaptive shading technology and unified memory architecture; next-gen gaming starting for tens of millions of gamers; NVIDIA RTX setting a new standard in price, performance and ray tracing, blurring the distinction between movies and games; RTX 2060 delivering teraflops of deep learning horsepower to improve gaming performance through DLSS; DLSS’s ability to create better images with higher performance; Electronic Arts and DICE releasing updates to Battlefield V that will incorporate DLSS support, optimizations and ray tracing for improved performance and image quality, and it enabling frame rates with ray tracing comparable to when ray tracing is disabled; RTX 2060 having the GeForce Experience and enabling features such as NVIDIA Highlights, which captures gaming moments, NVIDIA Ansel, which lets gamers take in-game photos and share them and enter monthly photo contests, and NVIDIA Freestyle, which lets gamers customize their games’ appearance and what the latest filters can do; and the availability of a bundle of the GeForce RTX 2060 and Anthem or Battlefield V are forward-looking statements that are subject to risks and uncertainties that could cause results to be materially different than expectations. Important factors that could cause actual results to differ materially include: global economic conditions; our reliance on third parties to manufacture, assemble, package and test our products; the impact of technological development and competition; development of new products and technologies or enhancements to our existing product and technologies; market acceptance of our products or our partners’ products; design, manufacturing or software defects; changes in consumer preferences or demands; changes in industry standards and interfaces; unexpected loss of performance of our products or technologies when integrated into systems; as well as other factors detailed from time to time in the most recent reports NVIDIA files with the Securities and Exchange Commission, or SEC, including, but not limited to, its annual report on Form 10-K and quarterly reports on Form 10-Q. Copies of reports filed with the SEC are posted on the company’s website and are available from NVIDIA without charge. These forward-looking statements are not guarantees of future performance and speak only as of the date hereof, and, except as required by law, NVIDIA disclaims any obligation to update these forward-looking statements to reflect future events or circumstances.

© 2019 NVIDIA Corporation. All rights reserved. NVIDIA, the NVIDIA logo, GeForce and Turing are trademarks and/or registered trademarks of NVIDIA Corporation in the U.S. and other countries. Other company and product names may be trademarks of the respective companies with which they are associated. Features, pricing, availability and specifications are subject to change without notice.