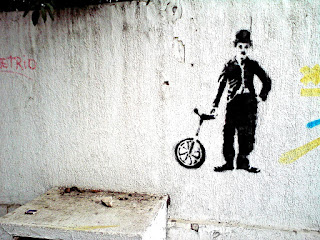 Charlie Chaplin became world famous in the era of pantomime, when movies were silent. Even now, most people would probably be able to recognize his "Little Tramp".

Once the Jazz Singer (1927) came out, all the studios were scrambling to come out with their own talkies. Not Chaplin. He hated the idea of adding sound to his movies. His next two films -- The Circus (1928) and City Lights (1931) -- remained as silent films. The King of Pantomime couldn't make the switch. At least, not yet...

Then Chaplin released a film called Modern Times in 1936. When he began filming, Chaplin experimented with recording dialogue. But, ultimately he was unhappy with the results. So he abandoned -- yet again -- the idea of making a talkie. However, he did concede in a couple ways.

Modern Times is a movie about machines... And how machines are controlling our lives. The only "dialogue" in the movie comes from machines. The factory-owner barks out commands on a console. In addition, there's a pre-recorded demonstration of the machine designed to feed the factory workers in an efficient manner.

By the end of the movie, Chaplin does something interesting. His Tramp "speaks" -- or rather sings -- for the first time on camera. Although it's not quite as straight forward as all that.

Chaplin has another trick up his sleeve.

We've come to the part of the plot where the Tramp has finally obtained a job as a singing waiter. He's not very good at the waiter part and his boss tells him (via the standard silent movie inter-title) that he better be a good singer. Then, while the Tramp prepares to go on stage for his turn, we get to watch and hear a snippet of the other singing waiters. The anticipation is building up to the Tramp's turn on stage.

And here's where Chaplin thumbs his nose at us. (SPOILER!) The song is in gibberish. The Tramp has forgotten the words to the song he's supposed to sing. So... he makes up nonsense words.

And it works. For his audience in the movie world. And for us, the audience watching the movie. Even if we don't exactly understand what he's singing, we get the gist of the song. And the song is a delight to watch. (And if you haven't seen it, watch the movie.)

Chaplin went on to make "real" talkies, starting with The Great Dictator. And while he does don the familiar costume as the Jewish Barber in the movie, Chaplin was adamant that the Barber was not the Little Tramp. Thus making Modern Times the first and last time people heard the Little Tramp's voice. Chaplin never made another movie featuring his well-beloved silent character.

This post first appeared on A Moon Brothers Film..., please read the originial post: here
People also like
Have you ever made love in front of other people?
Common Problems with Slit Lamp and Repair Needs
Home Workouts for Weight Loss
Telegram Marketing solutions
It's Time To Rebuild
how to remove dark circles in 2 days
Epoxy Flooring on Concrete
Make Money Online From Home
Comparison Between The 3rd Ranked & 2nd Ranked Framework: Flutter Vs Angular
This Is What You Should Do If You’re Laid Off