Never Too Much B-roll 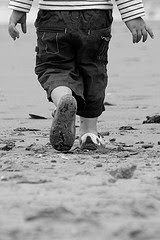 What exactly is b-roll?

Let's begin with what b-roll is not. In documentary, you usually film interviews with various people. B-roll is not the interview.

If a documentary just shows one interview after another, things might get a bit... how shall we say... boring? Do we (the audience) really want to watch a bunch of talking heads without interruption? That's where b-roll comes in.

B-roll is the footage that you use to cutaway from the talking head.

B-roll is the footage of the professor writing on a white board in the lecture hall. It's the man and woman strolling down the garden path with their dog. It's the author sitting in the library, reading a book. It's the baker pulling bread out of the oven. It's the kid looking for seashells at the beach.

And that's pretty much it. Picture. (Sound often doesn't really matter. Even though it's wise to capture the sound for atmospheric reasons.)

One reason for b-roll is because people don't usually speak in nice sound bytes. Interviews can be long and unwieldy. A question is asked, and the answer sometimes needs a little bit of editing. Not because anyone has any intention to change the meaning of the interviewee's words, but to clarify their response. That means there'll be a cut, and so you may wish to cut away to something else.

That's where b-roll come in! This kind of footage can be used to cover up those edit points.

B-roll can also be used to clarify what the speaker is talking about. If an interviewee is talking about how the dog saved their life, you could show footage of the person interacting with the dog. Sometimes, it can also be used for symbolic meaning. For example: the subject looks out through a rain-splattered window to represent a feeling of sadness or depression.

Nobody wants to watch a documentary of one talking head talking right after another talking head. You need b-roll. And lots of it. There probably isn't an editor alive that ever claimed to have "too much" b-roll.

Never Too Much B-roll