Demo Reels from a Casting Perspective 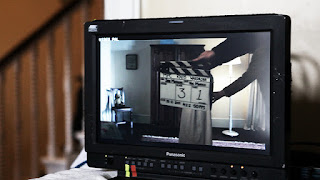 In today's world, a good demo reel is an important (if not essential) addition to an actor's portfolio... probably as important as the actor's head shot. Especially in film.

As filmmakers, we use demo reels all the time to help us find the right actors for our film projects. We encourage actors who submit to our casting calls to send a link to their demo reel.

Here's what you need to know about demo reels, from a casting perspective.

Because there are so many actors who respond to a casting call, we only have so much time to devote to each actor. We're looking for something to grab our attention right away, to make us want to keep watching.

...The Importance of 10 Seconds
Did you know that the average demo reel is watched for 10 seconds? That's 10 seconds to make a first impression. Then, if those 10 seconds are promising, the average time spent watching turns into 30 seconds.

We haven't actually timed how long we'll watch a demo reel, but this does seem close. It's sometimes a quick decision because there are so many actors we have to watch. So, don't waste those first 10 seconds on your contact info against a black screen. Instead put this at the end of the reel. Or put your name at the bottom of the screen for your first scene.

...More than One Clip
Okay, so does that mean you should limit your reel to only 30 seconds? No, give us some options. Sometimes we'll skip ahead to see another clip. That said, keep the clips relatively short. You don't need to tell a story with the clip. It just needs to show you in action. We want to see you act.

We probably won't cast you from just your demo reel. Usually, we'll need to see you come in at some point. But the demo reel may lead us to contact you to come in for that screentest.

Demo Reels from a Casting Perspective