Happy Birthday in the Movies 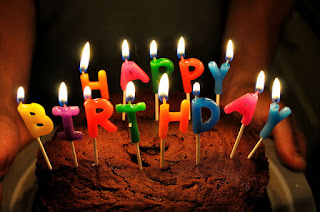 The Happy Birthday song is one of those songs that everybody knows and probably sings several times a year... right?

But have you noticed that when it comes to the movies, you rarely hear the song?

Up until Now
If you have ever heard the song in a movie, you know that the filmmaker/studio paid good money to the song's copyright owner: Warner Music Group. In fact, they have brought in around $2 million a year in licensing fees for this song alone. Depending on the project/performance. An indie documentary might have had to pay something like $1,200. For other projects, the song could have cost as much as $10,000.

That's why most movies would skip the song altogether. Or decide to go with "For She/He's a Jolly Good Fellow" in its place (which is in the public domain).

A Brief History
The melody was originally published in 1893 as "Good Morning to All" (written by sisters Mildred and Patty Hill). The combo melody with words appeared in 1912. (Sounds like public domain material, doesn't it?)

But when the song was included in the Irving Berlin show As Thousands Cheer in 1933, a lawsuit ensued and "Happy Birthday to You" was registered for copyright in 1935 by the Clayton F. Summy Company (publisher for the Hill sisters). Note: This was AFTER the 1922 cutoff date, which is why they could claim it wasn't in the public domain. The copyright eventually transferred to the current holders.

So... it looks like the Happy Birthday song is indeed in the public domain! The copyright is only on the particular piano arrangement, not the song itself.

Which means movies can starting showing birthday party scenes, letting characters sing to their hearts' content. But will they? Really, if you think about it, how many movies need a birthday scene? Unless the story demands it, there is really no need to have people sing Happy Birthday in a movie just for the sake of singing Happy Birthday. So, with that said, we may not see much more of the song than we currently see.

But, it's still nice for filmmakers not to have to worry about paying money to secure the permission to use such an old, well-known song.

[Photo by Will Clayton]

Happy Birthday in the Movies