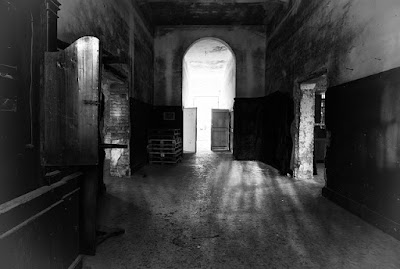 Whether filming in bright daylight or at night, the well-placed shadow creates questions. You can hide clues from an audience. Or from a protagonist.

Even (or flat) lighting is usually boring. No shadows. No secrets.

The use of shadow in movies can also be very practical. As filmmakers on location, sometimes we find that some part of the location just isn't right. That's when we can use shadow to our benefit. To hide a weakness.

And while it might be practical, it also has to work within the framework of the movie itself. Shadow creates mood and if the mood doesn't match, you may have a problem.

As a contrast, think of television shows are pretty evenly lit. These shows are filmed in a studio where the lights are set overhead. TV often deals with multiple cameras and quick turnaround times. Think sitcom. The plot is also more dependent on the witty banter or antics of the characters. Or soap opera. And yes, there is such a thing as "soap opera lighting". It uses "flat" lighting; no shadow.

But for movies that want to work with subtlety, there's the option of using shadow.

Don't think the filmmaker's use of shadow to be an accident. ("That's just how the light fell.") No, it's more often a stylistic choice. Sometimes it takes hours to set those lights to get the right atmosphere for the shot... to create a shadow that will focus the attention of the audience to what's important in the scene. With the shadows obscuring certain parts of the scene, the eyes of viewer is forced to pay attention to what they can see. A good movie is all about setups and reveals.

And for the filmmaker, the right use of shadows is just one more tool at hand.