This is a Hot Set

You might think a "hot set" has something to do with the hot lights that make any film set quite toasty. And while that's true (that lights do make the temperature rise), a "hot set" has a different meaning.

Actually, it'd be closer to the mark to say the hot set is more like a crime scene. Just a little yellow tape to keep people from disturbing anything. Yes, that's what it's like when you're on a hot set. 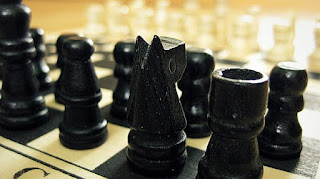 "This is a hot set" basically means don't touch anything!

It means we're about to film the scene and we need everything to remain the same for continuity purposes.

On one of our previous feature films, Under Jakob's Ladder, we had to deal with chess sets. Quite a few chess sets, actually. It was always a temptation for some crew or cast members to play the game or complete the move while the camera was being set up for a different angle. (Or at lunch when the set is relatively abandoned for a short period of time)... Usually it was because they did not realize that it was actually a hot set.

So, what to do when you're on a hot set?

First, assume the set is hot. Don't touch anything. Unless you're working for the props department, and have been told to move a prop, you shouldn't be touching anything. No matter how tempting it is.


Maybe they need to start using some of that police tape on set! (Or would that just slow things down?)

This is a Hot Set