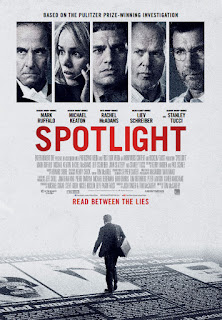 The 88th Academy Awards ended up being a very unpredictable evening indeed. Everything seemed to be shaping up for The Revenant to win Best Picture, with Alejandro G. Iñárritu winning Best Director for the second year in a row and Leo DiCaprio finally nabbing an Oscar for Best Actor. However, in the end, is was Spotlight that came in for the upset, despite the fact that the film only won one other award during the evening for Best Original Screenplay. However, the big winner of the night was Mad Max: Fury Road, which absolutely dominated in the technical categories, winning 6 out of its 10 nominations.

Overall, I ended up getting 14 out of 24 of my predictions correct, which ties my tally from last year. Some of the misses that surprised me was Mark Rylance winning Best Supporting Actor over favourite Sylvester Stallone and Ex Machina ending up winning Best Visual Effects, one of only two technical awards Mad Max: Fury Road didn't win. I'm sort of kicking myself over these swerves, since these are both cases of nominees I wanted to win actually getting the award.

The ceremony itself, hosted by Chris Rock, addressed the recent diversity controversy, which has accused the Academy of not nominating more visible minorities. Chris Rock actually did a very solid job with his hosting duties and the show made sure to feature many visible minorities among the presenters, including Bollywood actress Priyanka Chopra and Korean actor Byung-hun Lee. In fact, Sacha Baron Cohen poked a little fun at the whole #OscarsSoWhite controversy by coming out to present as his hip hop character Ali G. A showstopping moment of the Oscars was Lady Gaga performing her nominated song "Til It Happens to You" from the documentary The Hunting Ground, which included many sexual assault victims appearing on stage. However, the actual Best Song award went to Sam Smith for his melancholy James Bond theme "Writing's On The Wall," which is most definitely a much more safer pick.

For the fourth year in a row, I watched the Oscars broadcast live from the Bloor Hot Docs Cinema, which was once again hosted by the sketch comedy duo The Templeton Philharmonic. There was trivia throughout the night for tickets to upcoming screenings and I managed to win myself tickets for this Wednesdays Doc Soup screening of King Georges.

Well, that's all I have to say about the Oscars this year. Until next year.