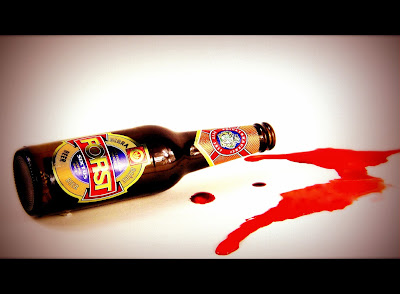 Clouds of blood are gathering over the Bay ...
warns Anna, the only slightly disheveled tarot reader in Mario Bava's Bay of Blood from 1971. What a perfect combination: Bava and a cold Forst Sixtus, a doppelbock made in Italy. For me, Mangus, this is near perfection.

It's possible I may not be enjoying this experience for all the "right" reasons, if there is such a thing. It's true, I'm a huge fan of the Italian horror films of Bava, the colors, the lighting and the look. It's also true, though, that I'm equally drawn to the films for their vintage vibe, that sexy cool 1960s/early 1970s mod tone that speaks to me. What I'm saying is I watch them for both the films they were, as well as for the films they are in contrast to today. Is that wrong?

Seriously. Look at this phone from the movie. That, my friend, is a cool, cool phone.


For me, Bay of Blood has it all. Mod sets. An amazing soundtrack combining swanky lounge hipness, overly melancholy piano tracks and stark percussive weirdness. Strange camera angles. You've got a sex scene where two lovers are are speared together in the act, and this scene appears a full ten years before a similar scene will be used in Friday the 13th, Part 2. You've got nearly a full 8 ½ minutes from the start of the Film until even the first word is spoken, with most of the sounds in this time a buzzing insect and a squeaky wheelchair wheel. You've got stylized slasher scenes so hip you don't even care that you can notice that the actors weren't able to hold their breaths before the camera cut away. You've got one of the oddest endings with an inappropriately bouncy Italian da-la-la-la song I swear you'll be humming for days. And yeah, you've got cool furnishings, cars, clothes, and hair. Beautiful, man.

Perhaps it was the 1971 Italian cool that influenced me, but as I was rewatching this movie (yes, I can easily rewatch Bava films), I was drinking what tasted like the BEST BEER I HAD EVER TASTED, A Forst Sixtus Doppelbock. I had picked it up specifically to drink while watching this flick. Was it the knowledge that I was drinking an Italian beer while watching a Bava movie that made it so good? Well, yeah! Of course! I was all about full out Italian sexy.

I know the next time I have one of these beers, if I get a chance to drink one again, it will probably be just a really tasty beer. But tonight, drinking it while listening to Italian accents (subtitles all the way -- no overdubs for me, thank you very much) and music by Stelvio Ciprioni, it tasted like ultimate cool. You know what? That's a pretty good taste.