Tracy Strauss is meeting with Dr. Zimmerman to find out why and how she has the ability to freeze matter. He tells her that Tracy, Niki and Barbara were three test subjects that were given powers by manipulating DNA. When she asks for more information Zimmerman relays to her that a company was involved but that they made him forget everything about the research. She gets angry and demands that he take the powers away. When he tells her she cannot she begins to freeze him but releases him before he splinters into ice shards.

Matt Parkman is looking at the painting of him carrying a woman. When he asks the tribesman who she is he is told that it is his future to unravel. Matt takes a green porridge from a bowl and eats asking if it will help him see the future. When that doesn’t work the Tribesman places his headphones on Matt whose eyes then turn white (i.e. Isaac Mendez fashion). Matt dreams…

Future Peter and Present Peter arrive in the future and people everywhere have abilities. Some speed by quickly, to fast for the eye to see, as others fly away on their normal daily rounds. Future Peter tells his companion (a younger himself – I don’t think I’ll ever get the terminology of time travel straight) that all those with abilities will destroy the world. Future Peter asks Present Peter to find out who has developed the formula and to stop him. In the process he tells him not to step on too many butterflies (referring once again to the Butterfly Effect). Future Claire suddenly appears and shoots Future Peter. As Present Peter flees the Haitian tries to capture him but Peter hits him as he goes by.

(Note: The poor Haitian has taken a beating the past two episodes – First, Ando whacks him at the movie theatre and then Present Peter does the same in the alley.)
Claire stands over the body of Future Peter with Benjamin Knox and Daphne and tells them that Future Peter is not dead! Claire tells them that they need Molly (Molly Walker from season one) to find the younger Present Peter so that she can kill him.

Hiro and Ando are locked in a cell at Primatech and discuss a means to escape. Ando is angry that Hiro does not trust him and that it all stems from Future Ando killing Future Hiro.

Nathan is choosing a desk for his new senatorial office when Linderman shows up again. Linderman again declares that Nathan is the only one that can see him and that he wants to make him the next President of the United States. Linderman tells Nathan that this is the path to salvation and Nathan tells him he wants none of it if Linderman is leading the way.

Mohinder continues to deteriorate and is now highly sensitive to sunlight. Maya tells him that he is working too hard but he tells her that it is too help eliminate her power. In his audio journal he explains that the formula is transforming him. (Just into what has not yet been determined.)

Present Peter comes to see Mohinder who has digressed into… something very different. Among Isaac’s old paintings Present Peter asks Mohinder to help him find Sylar because he needs his powers. Mohinder tells him that he got the formula wrong and that Sylar’s power is very dangerous (as if we didn’t know that!)

Gabriel and his son Noah (huh!) are making breakfast when Present Peter arrives. When Sylar realizes that this Peter is from the past he tells him that his power is a hunger that consumes and pushes a person to know more and to want to have more. Present Peter tells Sylar that he can save the world!

Daphne and Matt are married and have a small baby together. Molly Walker lives with them. They are discussing the fact that Present Peter and Future Peter must be stopped.

Present Peter asks Sylar to paint the future. When his eyes roll up in his head and he finishes we find the picture of the world exploding, again! Sylar hands Peter the Sylar watch he’s kept all those years and tells him that if he can fix it he will gain his powers. Present Peter fixes the watch using his powers.

Future Knox, Daphne and Claire enter the house and take Noah, Sylar’s son, captive. A fight, in super-fast motion, begins between Daphne and Peter as Sylar and Knox battle it out. Knox throws the table into Noah killing him and Sylar becomes angry, kicks Knox’s ass and then in a whirling, throbbing ball of flame explode into an immense nuclear cloud. 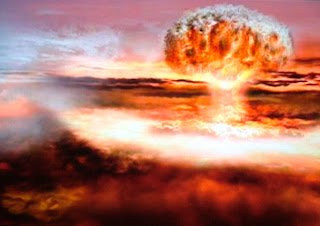 Hiro and Ando are trying to escape out the vent in the ceiling and are discussing their friendship woes. Hiro apologizes to Ando and just as he is about to escape the Haitian appears.

Tracy Strauss tries to turn herself in for the murder of the reporter but freezes the telephone in an emotional outburst. The phone falls to the floor and breaks into pieces.

Mohinder is studying the mutation and remarks to his audio journal that he cannot reverse the effects of the formula. A knock on the door interrupts his work and it is the bully from the apartment upstairs. The man punches Mohinder and tells him that he doesn’t know who he’s dealing with. Mohinder says, “Neither do you!” and snatches him into the laboratory. Presumably, to be guinea pig number one.

In the meantime, Nathan is visited by Tracy who hands in her resignation. Nathan is surprised and Linderman tells him that he must go after her and that he must pray for guidance.

Tracy Strauss is then seen on the bridge overlooking the mall in D.C. over the Potomac River. In a suicidal attempt she jumps but is rescued by a flying Nathan. Later, at Tracy’s apartment she understands that she is not the only one with powers and shows Nathan her ability. They kiss and the rest is well… history or the future or the past. I’m having trouble keeping up!

Four Years in the Future

Outside the Primatech Company, beneath a large ornamental piece of art in the shape of the symbol, President Nathan Petrelli and the First Lady Tracy are mourning the loss of life at Costa Verde, Californian in the explosion. During the press conference Nathan tells the nation to find their loved ones and pray for the souls of the dead. 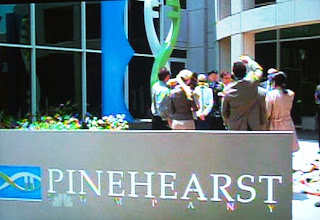 Four Years in the Future

Future Peter lies dead on a gurney as Present Peter is confronted by Future Claire and the Haitian. She tells him that 200,000 died in Costa Verde and that he is going to feel the pain of every last victim. She cuts Peter over the chest a number of times but before she can really begin the butchery Nathan steps into the room and commands her to stop. Claire asks if it’s the President or her father asking. When he says, “both” she leaves. Nathan releases Peter from his bonds and tells him that one man cannot save the world. Nathan tells Peter that he knows he doesn’t trust him and that he should read his mind. Peter admits that Nathan believes what he is saying but thinks he’s wrong. In a fit of rage Peter buzzes through Nathan’s head and time warps away…

Sylar is still captive in his cell on Level Five as Peter appears and grabs Sylar by the throat. Sylar looks into his eyes and reveals that Peter has the hunger! Peter tells him that he will not become evil but Sylar tells him that he already is. In the process he also calls Peter, brother!

Matt Parkman is still in a trance. He watches T.V. with Molly as the tragedy at Costa Verde, California unravels on the news. He is obviously upset because he knows that Daphne went to Costa Verde. Daphne appears at the door and Matt is obviously relieved to see her but she tells Matt that she wasn’t fast enough. As she falls Matt sees that her entire back has been badly burned. This scene then renders the Tribesman's painting of Matt holding Daphne true.

Angela and the Haitian are discussing the formula with Hiro and Ando after their failed escape attempt. Angela tells Hiro about how the formula can turn normal people into those with abilities. Ando tells her that Hiro will not rest until the formula has been safely rescued. Angela tells him that he is the only one that can do it and that he holds the key to the mystery.

Later, Hiro and Ando are seen in the dark in a cemetery exhuming a coffin. When they open it they find a less than happy Adam…

At the Pinehurst Company we see two pieces of sculpture that are in the shape of the symbol. Also, the logo for Pinehurst is the DNA strand.

The Tribesman tells Matt Parkman to “find his totem” and that it will “guide you on your journey.” When Matt asks if that was a tribal thing he tells him that it is Carl Jung “Analytical Psychology.”

Mohinder’s first audio journal entry is 13 and the second is 16 which means that they must be relatively close in time together.

The number on Mohinder’s laboratory # is 681.

The Tribesman is wearing a Universal Studios t-shirt.

There is obviously some "thing" at the Pinehurst Facility that dampens powers. With the Haitian travelling to Germany, etc. it is not feasable that he is the source of the dampening. There must be some other mode being used to restrict the abilities of those enprisoned there.

Also, with Hiro and Ando being held captive on Level Two and the real villains on Level Five it makes me wonder about what is being kept on Levels Three and Four. And... is ther a Level Six?

When Tracy visits Dr. Zimmerman the above photo is seen in the house. Dr. Zimmerman, one of the three test subjects (Tracy, Niki, or Barbara) an unknown woman, and The German. Hmmm... the plot thickens!

Sylar's son Noah calls Peter Uncle when he first comes into the home. Does this mean that in the future Sylar is unveiled as Gabriel a brother? Or, is Claire the mother?
More to think about...