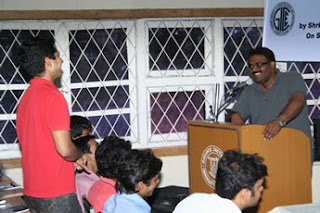 The function was attended by renowned editor/filmmaker Sankalp Meshram who briefly addressed the entirely packed hall.

Mr. Sankalp Meshram, after doing his Post Graduate Diploma in Editing from the FTII Pune, has been working as an Editor and Film Maker. He edited the Feature Film ‘Katha Don Ganpat Roanchi’ in 1997 (Marathi), which won the state award for the best Film apart from being shown at various International Film Festivals and the National Award for Best Editing in the year 2001 for the Film ‘Lokapriya’. He also wrote and directed ‘Chutkan Ki Mahabharat’ which got him the National Award in the year 2005. He is the Head of the Editing Department at Digital Academy- The Film School, Mumbai. 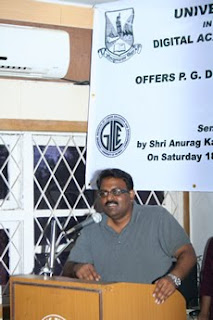 He narrated the story of the chance beginning of his film career- how he narrowly escaped the dazzle of science, was forced into commerce and was almost on the verge of completing his Chartered accountancy when he secretly wrote the FTII (Film & Television Institute of India) entrance test, passing it successfully. He doubted the decision & then finally decided to join.
“Filmmaking is a calling, not just a profession” he said, having worked in the industry for 15 years now, with no regrets. The ones who receive this calling have a strong affinity to its form and are almost fated to be part of it. He believed that it is a misconception that filmmaking is for specific kinds of individuals or artists; all that is needed is the talent for story telling and most people already told stories. He encouraged a few to volunteer their activities of the day, before coming to the seminar. Some responded with sparse pointers while some others traveled even into flashbacks of why they wanted to be a filmmaker. These examples showed that humans employ speech patterns and make decisions based on priority of subjects or words and even the duration. Even everyday communication is an act of story-telling; only in cinema the technique is different, the language used is visual & aural (not necessarily words).

A well told story is one which has the right elements told in the right way. It requires a critical balance between conscious & unconscious editing. The experience of dreaming is similar to that of watching a film. Their strange events and strange editing somehow reveal some things about the self, but in an almost entirely non-verbal manner; cinema aspires towards this beauty of dreams- the perfect illusion.

“An act of film viewing itself is an act of filmmaking, the idea of a film is based on the creative faculty of the audience” saying this, he emphasized that imagination is not the luxury of a few people, it is a necessary survival faculty needed to process the present, forecast the future, create probabilities etc. There are gaps and spaces in the world around. Imagination is what helps to complete this world. Filmmaking depends on the viewers’ imagination to fill in the gaps.


“Why do we need to learn filmmaking?”
It is a difficult art form; it consists of a new kind of syntax and language which needs to be nourished by talent & instinct. This has to be acquired exactly like the skill of riding a bicycle must be learnt- gracious trial & error until the process is internalized. And finally it all comes down to how good one is at creating a cinematic language which is universal and connects with the audience.
“There is a method to the madness in cinema…its all about training your instincts to become an instinctive filmmaker…”