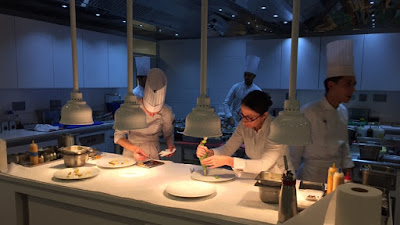 Top female chefs are profiled in The Heat: A Kitchen (R)evolution. The restaurant industry has traditionally had men in the role of head chef. However, this is changing with more women taking charge at restaurants around the world. Seven female chefs, including "raddest vegetarian chef" Amanda Cohen, Toronto's Charlotte Langley, and Gordon Ramsey protege Angela Hartnett, talk about their experiences working in this very cutthroat industry.

Director Maya Gallus (Girl Inside) profiles the changing face of the culinary industry with The Heat: A Kitchen (R)evolution. Despite the fact that women have been stereotypically viewed as the ones that cook at home, it has been men that have predominately filled the chef role in major restaurants. However, more women are starting to take charge and are more than willing to tackle the challenges of a high stress kitchen environment.

There is a comment made by one of the chefs interviewed in The Heat: A Kitchen (R)evolution, who states that the male chefs that dominate the industry, often credit their mother for coming up with their recipes. It is that irony that is at the centre of this documentary, which tackles both this history of sexism in the restaurant industry, while also seeing how the current generation of female chefs are working to change that. Overall, this is an interesting look at a changing industry.

Benefits of onion juice for hair - Si…
Dacryphilia: The things you need to k…
Equipment for IVF and Andrology Lab
Karen Wiesner: The Stories Behind Cla…
Review: ‘Heroine’ by British Rockers …