A gunman killed himself after shooting six people dead and injuring two others at a hospital in the eastern Czech city of Ostrava on Tuesday.

One of the victims was shot in an operating theater and later died. The head of the hospital, Jiří Havrlant, told reporters outside the hospital that all of the victims were patients, and that the suspect was shooting people at close range in their heads and chests. 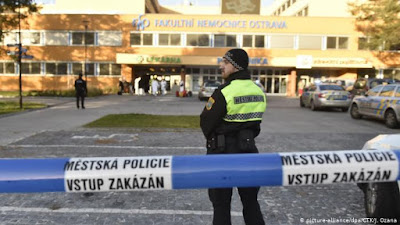 There have been multiple victims in a shooting at a hospital in the eastern Czech city of Ostrava. A man whom police officers had been looking for in a manhunt fatally shot himself in the head.
Illegally held firearm
"We have captured the shooting assailant. The 42-year old man had shot himself in the head before police took action, he is dead," police said.
Interior Minister Jan Hamacek said police will be investigating his motive.
"I'd like to assure the public that there's no danger anymore," Hamacek said.
Czech Prime Minister Andrej Babis told Czech public television the shooting took place in a waiting room.
President Milos Zeman expressed his deepest condolences to the survivors. He also thanked the law enforcement officers, the doctors and everyone who was helping.
The suspect used an illegally held Czech-made 9 mm gun, according to the regional police chief, Tomas Kuzel, who said police believe he acted alone.
Security across the Czech Republic was boosted following the shooting.
Ostrava is the third-largest city in the Czech Republic, located around 300 kilometers (190 miles) east of Prague near the borders of Poland and Slovakia.
Tuesday's incident was the worst shooting in the Czech Republic since a man shot eight people dead at a restaurant in Uhersky Brod in 2015.