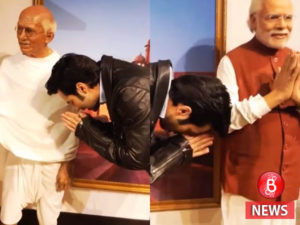 We all know that Varun Dhawan will be seen in YRF’s ‘Sui Dhaaga – Made In India’ which also stars Anushka Sharma in the lead role. Well, today the actor unveiled his wax statue in Madame Tussauds’ Hong Kong, and there he also took the blessings of Mahatma Gandhi and PM Narendra Modi for his upcoming film ‘Sui Dhaaga- Made In India’.

Varun posted a video from the wax museum and captioned it as, “#madeinindia

#suidhaaga. Got the most important blessings before I start this important film @anushkasharma.”

#suidhaaga. Got the most important blessings before I start this important film @anushkasharma

While Varun has revealed that he will start shooting for the film next month, it looks like Anushka has already started shooting for the film as a picture of the actress is doing the rounds of the social media and it is said to be her look from the film. However, we are yet to get a confirmation about the picture being her look from the movie. (Also Read: Leaked! Anushka Sharma’s first picture in a saree from the sets of ‘Sui Dhaaga’)

‘Sui Dhaaga – Made In India’ is slated to release in September this year. The movie will be directed by Sharat Katariya.

Album: Tracklist of Phyno Deal With It Album