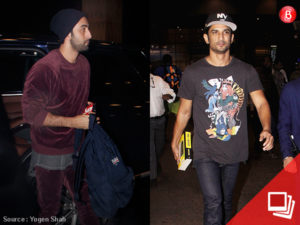 Sushant Singh Rajput and Ranbir Kapoor are the two intense heartthrobs of the generation, whether on screen or off it. As a result, seldom do we see their fashion game anything other than crisp. However, looks like this was the day when the two were simply not in the mood to perk up. For Ranbir, it is understandable as the actor lost his grandfather Shashi Kapoor day before yesterday.

The two were spotted at the Airport, with understated tones as far as their attire and overall vibes were concerned. Also spotted was Kajol, who too was quite dull in black. Take a look. (Also Read: Kangana Ranaut is one WINTER ready babe at the airport. View Pics!)

Wednesday morning was dull as we spotted our stars in quite boring outfits.