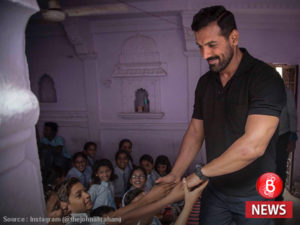 Actor John Abraham, who is gearing up for his next film ‘Parmanu’, was recently spotted in the company of none other than His Holiness Dalai Lama. The actor was on a two-day visit to McLeodganj with Wife Priya Runchal, to visit the place of his in-laws, when his brush with Spirituality happened.

John is the not the first Bollywood star to meet His Holiness and take lessons of Buddhism from him. Many other Bollywood stars too visit the Buddhism guru on a continuous basis. Not just Bollywood, Hollywood too is a fan of Dalai Lama and his teachings. (Also Read: John Abraham and Manoj Bajpayee team up for a dark thriller. Details inside)

John took to Twitter to share a picture of himself with the monk. He captioned the same as, “The closest that I’ve ever got to spirituality has been in the presence of his holiness……. the @dalailama#thedalailama #dalailama #spirituality#johnabraham #ja #jaentertainment”

The closest that I've ever got to spirituality has been in the presence of his holiness the @dalailama . . . . . . #thedalailama #dalailama #spirituality #johnabraham #ja #jaentertainment

Well, we are sure John is going to cherish this moment forever. Especially since the actor is not very spiritual, as he admits himself.

Of late, rumours were going round that all is not well between John and his wife Priya. However, with this trip to McLeodganj to his in-laws, we can say that those rumours can be put to the bin. The two are very much in love and happily married.

On work front, John is currently awaiting the release of his movie ‘Parmanu’, which is based on the nuclear bomb test explosions that were conducted at Pokhran, by the Indian army, in the year 1998. The movie which was earlier supposed to release on December 8, 2017, will now release on February 23, 2018, as the makers did not want to clash with ‘Padmavati’. However, now that the movie’s release date has been deferred indefinitely, following numerous protests, we wonder if they will be clashing again. ‘Parmanu’ will be clashing with Rani Mukerji’s comeback vehicle ‘Hichki’.