As the 5th episode begins, George Turner (Erik Thomson) and Katie (Anna Jullienne) get prepared for their first date. They ask their kids for advice about their wardrobe. Before George leaves, Woody (Rick Donald) arrives and asks to use the shower. It is clear that he intends to visit Becks (Esther Stephens) afterwards. Next, Sean (Jesse Griffin) greets the couple at the theater. The date gets off to a bad start when Sean turns on “In The Realm of the Senses”. George and Katie make their escape moments later. Outside, George and Katie admit they feel like they’re under a microscope. They decide to head to the pub for food and drinks. Once they arrive there, they’re greeted by Tracey (Emma Leonard) and Hannah (Cian Elyse White). 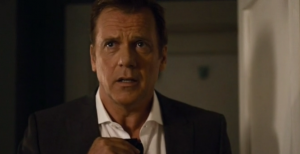 They’re harassed by Tracey and Hannah, before taking their seats. Meanwhile, Shay (Melina Vidler) and Arlo (Benson Jack Anthony) discuss George’s chances. They agree that he will not know what to do. During dinner, George tells Katie about Woody and Becks. Katie becomes upset and admits it will be awkward that she knows and Tracey doesn’t. Once again, the couple leaves right away. They head to the beach. There, they’re stopped by Zac (Rob Kipa-Williams) and Ike (Alex Tarrant). Zac makes a few inappropriate comments, before giving George a fish. After returning to their vehicle, George and Katie agree they’ve had fun, despite the chaos. Constable Tom (John Leigh) arrives and tells them about the summer people camping illegally. He explains that he has a solution to it this year.

George takes Katie home. After a brief chat, they share a quick kiss. A few days later, George is bombarded with questions by Arlo. George says nothing about a second date. On the way to work, Woody asks a similar question. Meanwhile, the locals break down a fence and begin squatting on Big Mac’s property. When George makes it to work, he finds Gloria (Jackie van Beek) arguing with Tom about his decision to let the campers storm the barricades and take shelter on Big Mac’s land. George is asked about the second date again. Then, he tries to figure out why the construction never started on the retirement village where the campers are squatting. Gloria refuses to answer questions. Shay asks Katie about the date at work. She admits that they had a great time. 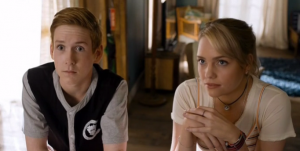 Next, Big Mac (Peter Elliott) learns about the campers. George speak with him about the idle construction. Once again, George is harassed about the second date. George visits Monty (Jonny Brugh) and tries to get information about the retirement village. Monty says something about the Chinese economy. Siouxsie (Olivia Tennet) refuses to give up any information. After a chat with Jan (Bridie Carter), George runs into Katie. They chat about the campers and Big Mac’s property. They say little about a second date. Katie tries to obtain information from Fiona (Michelle Langstone). She learns that Big Mac met with Swedish people at the campground not too long ago. George visits Sean. He is forced to open up about Katie, before he is given documents about the campground. 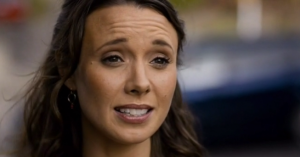 Later, Arlo arranges for Shay and George to meet him at the boat club. Then, George receives a call from Katie and learns about the Swedes. Big Mac visits the newspaper office while hunting for Tom. George makes a comment about the Swedes. Big Mac admits to talking with people from all around the world, but he says nothing else of interest. The family arrives at the boat club. It becomes clear that Arlo set everything up, so he could see Emma (Jamaica Vaughan). Then, George is again bombarded with questions about a second date. He refuses to speak with his kids about it. Woody and Becks arrive at the book club meeting. Tracey is surprised to see Woody with another woman. Katie is asked about her date with George. The following day, Woody visits George and finally tells him about his fling with Becks.

Woody admits he is worried about Tracey and how she might react. Zac arrives and escorts George out. Katie visits the office looking for George. He is out on a boat with Zac. Zac forces George to partake in a ritual and promise to be good to Katie. Ike tries to encourage Shay to go to the theater with him. She refuses. At this point, Katie learns about Zac’s antics. Then, George gets dragged away by Monty. He takes him to a boxing gym. There, Big Mac tells George the truth about the construction. He doesn’t have the money and his Chinese investors are broke as well. George gives Big Mac an idea. He suggests giving the land to the campers this year and taking it back later. Big Mac accepts it. Then, he gives George relationship advice. Eventually, George meets with Katie at the theater. They leave and head to the boat club, so they can chat.

They admit that George isn’t over Laura. They agree not to ruin their friendship and not to have a second date. Big Mac makes the announcement the following day. Arlo asks Emma if he can walk her to the boat club. She agrees. Ike tries to flirt with Shay, but she continues turning him down. Tracey seems happy for Woody and Becks.

This episode of 800 Words was fun, but slightly redundant. It felt like we were going in circles from start to finish. First, the date got ruined by pretty much everyone in town. Then, everyone in town asked George about the second date. It was pretty clear from the onset that George and Katie wouldn’t make it. I would be surprised if the writers ever put George in a serious relationship. The episode wasn’t terrible, but it felt a little irrelevant and drug out. It scores a 6 out of 10. Catch up with previous recaps of 800 Words now!