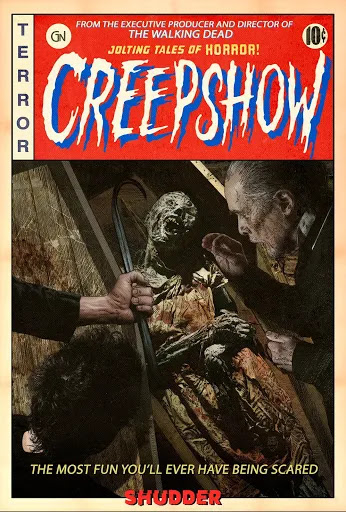 Everyone’s favorite horror anthology is set to return in 2019 with Shudder’s new incarnation of Creepshow, which will see makeup master Greg Nicotero (The Walking Dead) directing the premiere. Ahead of this weekend’s New York Comic-Con,  Shudder premiered the first poster that hearkens back to the original 1982 film directed by George A. Romero. The poster is designed by artist Tim Bradstreet and Nicotero, who will also executive-produce and supervise the show’s creative elements. His KNB EFX Group will handle the show’s creature and makeup effects. Each episode will tell original stories and be helmed by a different filmmaker. A homage to the horror comics of the 1950s, the original Creepshow featured segments written by Stephen King and was directed by a fellow horror legend, George A. Romero. Some huge names will be part of Creepshow, including both Stephen King and son Joe Hill, as well as Bubba Ho-Tep writer Joe R. Lansdale.

Creepshow will premiere on Shudder later this year and will feature episodes written by some of the biggest names in horror:
Creepshow is produced by Monster Agency Productions, Taurus Entertainment, and Striker Entertainment. Stan Spry, Jeff Holland, and Eric Woods are serving as executive producing along with Greg Nicotero, Brian Witten, Robert Dudelson, James Dudel, and Jordan Kizwani. Russell Binder and Marc Mostman are co-executive producing for Striker Entertainment.