One Week Until Good Omens! 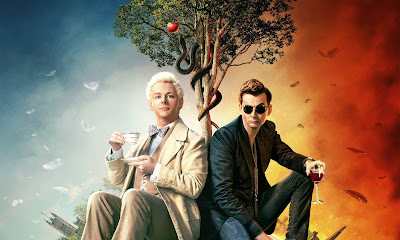 Terry Pratchett and Neil Gaiman’s classic apocalypse novel Good Omens: The Nice and Accurate Prophecies of Agnes Nutter, Witch is finally about to be brought to life! All six one-hour long episodes will air on Amazon Prime Video on May 31st.
The plot centres around a likeable but stone-cold evil demon named Crowley (previously Crawly) and the angel Aziraphale, two unlikely friends who have become accustomed to a certain lifestyle on Earth and seek to prevent its imminent destruction. The end of the world is signified by the arrival of Adam, a young antichrist and his faithful hellhound named Dog. 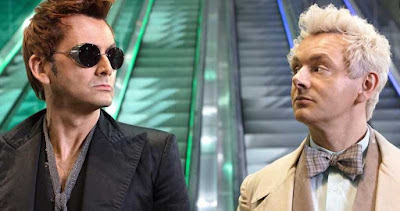 The six-part series stars David Tennant and Michael Sheen as the dynamic duo at the forefront. Also starring is a host of prolific and exceptionally talented names including Jon Hamm, Jack Whitehall, Miranda Richardson, Brian Cox, Frances McDormand, Derek Jacobi and Benedict Cumberbatch.
Other than original author Neil Gaiman’s majority contribution, the writing of the show has been left to Small Soldiers writer Gavin Scott and Monty Python actor and writer Terry Jones. The pair collaborated once before on the bizarre concept comedy Absolutely Anything starring Simon Pegg. At the helm, we have Scottish TV director Douglas Mackinnon, director of several episodes of Doctor Who, Jekyll, Outlander and Sherlock special episode The Abominable Bride. 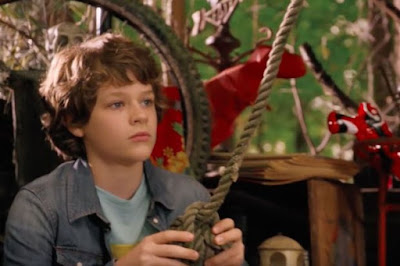 Filming began in October 2017 in Surrey, later moving to St. James’s Park, London and finally in Cape Town, South Africa. Earlier that year, Gaiman tweeted a photograph of Sheen and Tennant in costume on set.
Gaiman has claimed that bringing the book to life is an absolute must, as it was one of the final wishes of brilliant co-author Terry Pratchett. The delightfully weird and upbeat characters including God, Satan, the Four Horsemen of the Apocalypse, a few witchfinders and of course, the witch Agnes Nutter herself, will be brought to life and binge-watchable on Amazon Prime Video on May 31st.
See the trailer here!

One Week Until Good Omens!