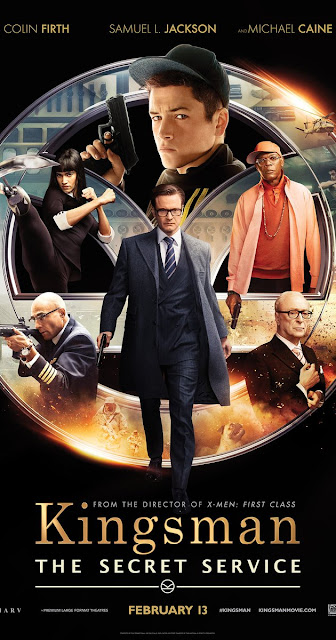 To celebrate the release of the Kingsman 2 trailer, I’ll be reviewing the original. We’ve known for a while that the spy genre is as stale as mouldy bread. Collectively 007, Jason Bourne and Jack Bauer have drained any life there was left in the category. Kingsman remarkably breathes new life into this genre by being a smarter spoof than that of Austin Powers, yet lacking the over seriousness traditional to spy fiction.


The movie is directed by Matthew Vaughn of comic book movie lore and like all his previous films Kingsman is balls to wall fun. The premise is the Kingsman, an independent, secret intelligence service of overly formal gentlemen run by Arthur (Michael Caine). When one of their agents dies in battle, new recruits are gathered then put through a literal elimination process. Top agent Galahad (Colin Firth) sponsors a troubled youth Eggsy (Taron Eggerton) out of guilt and as a favour to Eggsy’s father who died 17 years ago saving Galahad’s life during a mission.

Behind the scenes an evil genius is working on his villainous master plan. Said genius is played by Samuel L. Jackson, a mega rich tech entrepreneur rocking a lisp and a comical aversion to blood and gore. He is accompanied with his henchwoman Gazelle (Sofia Boutella), a double amputee who’s a murderous take on a blade-runner. Both are interesting spin on the classic bond villain trope.

As per usual, Vaughn instils gratuitous violent mayhem into this film. Despite the somewhat predictable plot, one scene alone makes the film gold. This where a Westboro-esque fundamentalist church explodes into a stunningly choreographed free-for-all, set to the guitar solo from the song “Freebird” by Lynyrd Skynyrd.

All things considered, this is a definite must watch movie. If not for a new take to the spy genre, then the mindless visceral action. I’ll giving this movie a ISYS rating of 8/10.


This post first appeared on Hello World, And Welcome To Our Movie, please read the originial post: here
People also like
Money Beliefs That’re Holding Your Business Back
Hollywood Dentist Providing Red Carpet Smiles
Understand You
Fiction Series So Big, They Cross Multimedia Platforms: The Witcher Series by Karen Wiesner
THE HIDDEN HILLS OF CADAQUES
Tips for Getting Your Backyard Ready for a Late-Fall Party
5 Unusual Phenomena That Video Technology Has Given Us
Know 7 Most Translated Texts in the World- you’ll be Shocked
Best PS5 Games Deals and Offers with massive discounts
Chloe Grace Moretz Looked Incredible at “The Peripheral” Special Screening
5 Ways To Splurge While On A Budget
Pool Cleaner / Vampire Slayer – Day Shift on NetFlix
Roald Dahl book made into a Spielberg movie