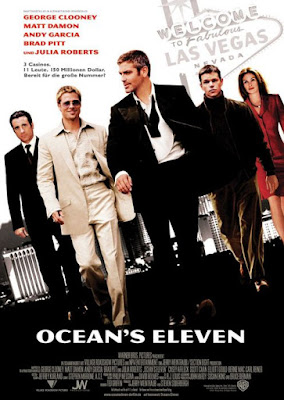 Ladies and Gentleman of the movie-blog-reading world:

Following on from my review of the 'Dark Knight' last week,  I'll be continuing my theme of absolute classics this week with a film that will have you both on the edge of your seat in suspense in some parts and rolling around on the floor dying of laughter in others. Stephen Soderbergh's star-studded 2001 remake of the 1960 heist film 'Oceans Eleven', which originally stared Frank Sinatra, is a film that will both have you begging to visit Vegas and perhaps more worryingly, thinking of ways of stealing 160 million dollars worth of goods from Casinos like the Bellagio, The Mirage and The MGM Grand in Sin City (I do not endorse this! ;)).

Starring the likes of George Clooney, Brad Pitt, Julia Roberts, Matt Damon, Don Cheadle and Andy Garcia, this movie was bound to receive plenty of critical attention from the get-go and let me tell you, it delivers!

The films protagonist is Daniel Ocean, played by George Clooney, who is fresh out of prison and looking for a new job along the lines of his former "unconventional" industry, stealing. He has a very cool and smooth demeanor but seems to use his skills for illicit purposes where, according to his parole board, he has been figured in over a dozen investigations where he was never officially charged. When he gets out of prison, he goes looking for his old buddy  Rusty Ryan, played by Brad Pitt, and propositions him to join in on an opportunity to steal millions from 3 Las Vegas casinos. The cool thing about this movie is that those 3 casinos are actually real and can be visited today in Vegas! (Don't ask me why they actually let people make a movie about them being robbed!)

When Rusty's scoping the job he surprisingly sees the owner of the Casino Tony Bennedict, played by Andy Garcia,   with Danny's ex-wife Tess Ocean, played brilliantly by Julia Roberts.  This shocks him and forces Rusty to confront his old friend and demand an answer to whether the heist is "about her". Danny replies "not entirely", and basically explains how he would like the ultimate outcome to be both financially rewarding to the crew of bandits and personally rewarding to his aspiration to win back Tess. They put together a team of 11 expert thieves who all specialise in various fields like Basher (Don Cheadle) who is an expert and explosives and breaking into vaults, pick-pocket Linus Caldwell (Matt Damon) and electronics and computer expert Livingston Dell, played by Eddie Jemison.

The film keeps the audience engaged for the entire two hours and has the classic heist film feel to it with moments of suspense, laughter and emotion. While the plot may not be the most original in the history of cinema, it still does a great job of keeping you guessing throughout the film and does a great job of keeping you entertained despite the relatively long duration. There are also some great moments of hilarity which helps keep the film lighthearted. There were plenty of times where I was laughing hysterically at great jokes incorporated seamlessly into the script. The star studded cast also seems to be a demonstration of how well respected Stephen Soderbergh is that he was able to get so many A-listers to accept pay cuts and actually make the film happen!

The directors terrific choice of camera angles and cinematography as well as the terrific soundtrack by David Holmes which will have your head bopping along on throughout the movie, also add to this great film.


All-in-all Ocean's Eleven is a great classic that I remember watching many moons ago in my early teens and I would recommend watching to all demographics over the age of 15! (Don't be naughty kids ;)).  It is definitely more satisfying, hilarious, exciting and glamorous than the original and should not be missed! I give it a 9/10.


This post first appeared on Hello World, And Welcome To Our Movie, please read the originial post: here
People also like
Sprawdź swoje IP i pobierz darmowy VPN
How to Choose an Epoxy Floor Coating for Your Garage
This Is What You Should Do If You’re Laid Off
Oscar health insurance florida reviews
MRS THATCHER’S DREAM
Life at 57 - Where I'm At
Middle Aged And Elderly Knee Massager Electric Knee Pad
Heal Your Body Meditation.
Fiction Series So Big, They Cross Multimedia Platforms: The Witcher Series by Karen Wiesner