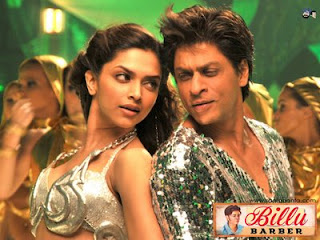 Billu Barber, is a 2009 Bollywood film by the director Priyadarshan, produced by Gauri Khan, with an adapted screenplay by Manisha Korde and Mushtaq Sheikh based on the script by Sreenivasan. It stars Irrfan Khan, Lara Dutta, and Shahrukh Khan, and features Om Puri, Rajpal Yadav and Asrani in supporting roles. Actresses Kareena Kapoor, Deepika Padukone, and Priyanka Chopra make guest appearances in item numbers. The film was released on February 13, 2009. It is a remake of the 2007 Indian film in the Malayalam language, Kadha Parayumbol.

Bilas Rao Pardesi (Irrfan Khan), nicknamed Billu, is a barber in Budbuda, a fictional village in the northern Indian state of Uttar Pradesh. He and his wife Bindiya (Lara Dutta) and their children Gunja (Mitali Mayakar) and Duggu (Pratik Dalvi) live in poverty, with Billu unable to even pay his children's school tuition. A man of pride and humility, he refuses to borrow money from local landlord Daamchand (Om Puri).

When Bollywood superstar Sahir Khan (Shah Rukh Khan) comes to this village to shoot his latest film, Billu's family, who believe that Khan is an old friend of Billu, pester Billu for an introduction. Gradually the news spreads and soon the whole village is after him for some chance of a meeting with Khan. The school even says it will pay Billu's children's tuition through 12th grade in return for Billu inviting Khan to a school function. Daamchand decides to finance new chairs, new equipment and new toileteries for Billu's Saloon in return for Billu inviting Sahir to Daamchand's place for dinner. Laakhu (Rajpal Yadav) wants a meeting with Khan to be given a chance to compose lyrics for films. Despite Billu's efforts at turning people away, telling his family privately that Sahir Khan would never remember him, Billu finds himself pushed to make contact — and is met with either stern rebukes by Khan's secretary or security forces. When a riot breaks out at the filming location, Billu is arrested for fooling people.

When the school function occurs, Khan, asked by local functionaries, does indeed appear. He announces his struggle in life and claims he owes his career to a childhood friend named Billu. In an emotional speech, he describes the friendship in detail, and bemoans having lost track of Billu when Billu moved away from their hometown. Learning that his childhood friend now lives right here, Khan visits Billu's house and promises to keep in touch and to live their lives together again. Billu again becomes the hero of the village.