A Donut With The Cutest Baby Ever! - Amy's Donuts , Colorado Springs Colorado 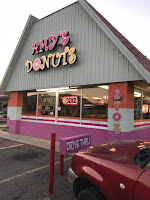 Wherever we go, I am always on the lookout for great Donuts.  On our recent trip to see our new great grandson, who by the way is the cutest baby on earth, we were told about Amy's donuts. My step-daughter and fellow snacker was the one doing the telling, so I knew I had to listen! It took another day,but we loaded up the vehicles and off we went.
Amy's donuts has locations in Columbus.O. Tucson,Az, and a new one coming soon in Spokane Valley,Washington and of course the one we visited in Colorado Springs.The Colorado Springs locationis open 7 days a week. 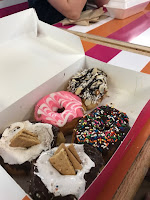 As we entered the store, we were greeted by a showcase filled with almost every donut you could imagine.  The hardest part was trying to limit myself to one donut. They had Andes Mint donuts, Cinnamon Toast Crunch donuts,maple bacon fudge, traditional donuts,frosted donuts of all flavors, filled and seasonal donuts, and many more. 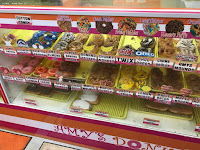 I finally settled on an Orange Creamsickle donut that tasted like it was just made.  This was at evening time too. Everybody with us had a different donut and for the most part, were very happy. Definately would go back, to try a different donut and visit the cutest baby ever!  You can find locations and hours for Amy's donuts on their website.  I can see this donut shop going nation wide.
http://www.amysdonuts.com/menu.html

painful sex during pregnancy - lovelc…
The BEST Harry Potter Pumpkin Juice R…
Day 4 – How to Rehab a Painful Should…
9 work clothes for women as a newbie …
Cafe Krujok, Voronezh


This post first appeared on David And Rebbel's Traveling For Food, please read the originial post: here
People also like
painful sex during pregnancy - lovelcute
The BEST Harry Potter Pumpkin Juice Recipe
Day 4 – How to Rehab a Painful Shoulder
9 work clothes for women as a newbie professional
Cafe Krujok, Voronezh
Artificial Embryo Created from Human Skin Cells
5 Unique Ways to Show Your Financial Advisory Clients Appreciation
Tongs Baby Chic II
“The Friend Who May Not Seem a Friend”: The Cat and the Fire, Part 1 of 3

A Donut With The Cutest Baby Ever! - Amy's Donuts , Colorado Springs Colorado