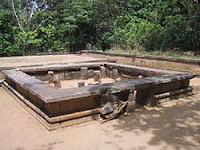 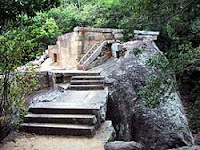 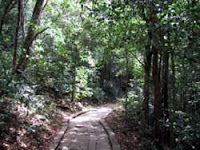 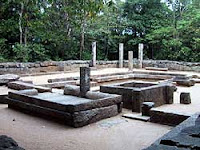 THE LAND OF DELIGHTS

Romances From The Resplendent 1 by B. Upul N. Peiris

The first King of Lanka, King Vijaya, who arrived in the , the in the year of final extinction of Gauthama Buddha (543 BC), by karma, wasn’t blessed to have a son. Since the next best one, if there is such a one, no doubt is the nephew. Prince Panduvasdev (Pandu Vasudeva), son of the brother of King Vijaya, King Sumithra of (modern Bengal) of northern was brought into the island & was crowned the king of Lanka an year following the demise of King Vijaya.

Meanwhile in , King Pandu of Vanga kingdom was threatened with war by no less than seven princes of seven neighboring kingdoms. The cause of the impending war, as in the Iliad & Ramayana & many other epics was non other than a woman: the king’s lissome daughter of matchless beauty. Her hand in marriage was valued, by the princes, over & above the war & death of hundreds of thousands of men. Well! Hell or nuclear bomb, you have to get your women, a man has to do what he has to do. Her marriage to one would cause numerous bloody battles since no prince worth his salt, with an army & kingdom in his possession, could leave a goddess-like princess to any other man. Her father King Pandu was no other than son of King Amithodana, the brother of King Suddhodana, whose son Prince Siddhartha transcended the human condition to become supremely enlightened Buddha. It was beneath the virtues of kings of Shakya clan to get involved in wars. The court astrologers came to the fore by making a timely prediction. Set the princess adrift in the ocean, she would safely reach an island, whose king would make her his queen. The princess together with 32 noble maids was set adrift in the great River . The river carried them to the ocean & by good fortune, the vessel caught favorable land-bound wind & ended up in the coast of Thammana of the .

King Panduvasdev of the , the , already being alerted by his own astrologers on a miraculous event to unfold had made his post at the coast. The princess & her entourage of 32 noble maids were taken to the kingdom in ceremony. As if the kingdom of the wouldn’t do, now the king had the untold fortune of taking a seaborne delight of a lissome princess of matchless beauty to his embrace: a Venus. The state of affairs couldn’t get any better. His ministers wouldn’t take a backseat either: they made swift moves to the 32 maids. All comes to the one who wait & make the right move in ripe time.

Unlike his uncle, King Panduvasdev was blessed with children; his Queen Bhadrakathyana gave birth to no less than ten sons. The only girl she gave birth grew up to be a maid of such beauty that would overwhelm one & all with maddening desire with the mere sight of her. Hence she was called Unmada (maddening desire in Sinhala) Chithra (picture). Like mother, like daughter, the beauty of the Unmada Chitra was the subject of royal astrologers: the Brahmins skilled in the sacred texts foretold she would give a birth to a son who would eventually slay nine of his 10 maternal uncles for the sake of sovereignty. Eldest son of the king, Prince Abhaya restrained his brothers from causing harm to his one & only sister.

Princess Unmada Chitra was imprisoned in the chamber built at the top of a light house like tower called Ek Tam Ge (meaning one chamber house in Sinhalese). The one & only chamber of the tower was at the topmost of the tower & access to which could be made only through the most exclusive chamber of the kingdom; royal bedchamber.

Having heard of the maddening beauty of the princess, a Prince by the name Deegha Gamini (Deega meaning tall in Sinhalese) was overwhelmed with the longing for her. The prince was a son of one of the 6 brothers-in-law of King Panduvasdev. They had arrived from Vanga on a visit, immediately following the arrival of Bhadrakathyana & then resolved not to return to Vanga but to take abode in the island of delights. Prince Deega Damini would spare no stone unturned & stealth scaled the lighthouse like pillar from the outside wall & then take a dive out of the window to the sea if he couldn’t take Ummada Chithra to his embrace. Lust & love would drive the lion-hearted to become larger than the life. Hiding his true intentions to the hilt, the prince sought the consent of his father to call upon the king.

The king Paduvasddev, impressed to no ends, by the stature & warlike skills of his nephew who paid him a courtesy call, appointed him a guardian of the royal place. Prince Deegha Gamini, by means of a collapsible mechanical ladder called “Karakataka Yanthra” succeeded in scaling the tower. It was the beginning of his nocturnal tryst with Princess Unmada Chithra. The princess didn’t fail either. She conceived. Swift moves brought in swift results.

Having heard of the affair & the result of it, & having resolved that no harm be inflicted upon the prince & the princess, King Panduvasdev summoned Prince Deegha Gamini & ordered, in view of the prediction, should a son be born, new born be put to death at once. The prince having taken his lion-hearted course of the destiny, having confronted the king & the royal court, from thereon the princess set to work. It was to be the time for womanly virtue of weaving a net of schemes & lies to save the life of her son. Princess Unmada Chithra had an attendant find peasant woman with the same maturity of pregnancy as herself. When the time was ripe, when the women gave birth to a daughter, the newborn girl was brought into the chamber by the attendant of Chitra. It was declared a girl was born to the princess. The mother & grandmother, who were in the scheme, joining the names of the grandfather & the eldest uncle, named the newborn boy Pandukabhya.

The newborn son of Chithra, smuggled out of the Ek Tam Ge by the attendant to a villager, who was sworn into the secrecy & whose wife gave birth to a son on that very day. The villager declared that his wife gave birth to twin sons. The prince was brought up in secrecy by the villager. Prince Pandukabhya, son of Prince Deega Gamini & Princess Unmada Cithra, in the prime of his life waged war against his maternal uncles. During the battle at RIITIGALA nine of his 10 uncles were killed. Prince Pandukabhaya, ascended the throne at the age of 37 to reign over the for 70 years during 437 BC to 367 BC.

According to popular belief, Lord Hanuman of supernatural powers, who could rise up to the occasion & become bigger than the task assigned, become bigger than the problem (with apologies to Suda Murthy of Infosys, India) flew, jump, travelled over Ritigala, by accident, dropping one of the chunks of the Himalaya, which he was carrying from India to Lanka for its medicinal herbs. Lord Rama’s brother, Prince Lakshmana was mortally wounded in battle & only a rare herb in the could save his life. Well, come to think of it, the pocket of vegetation of healing herbs & plants at the strange mini-plateau at the summit of Ritigala that is distinct from the dry-zone flora of the lower slopes & surrounding plains at Ritigala could be accounted for. Perhaps.

Written by B. Upul N. Peiris

NOW MORE ON RITIGALA FOR YOU