Idioma: En
Bullet Train In India: Here’s How It’s Going To Change Our Train Travel
http://traveltriangle.com/blog/bullet-train-in-india
Follow me
Share me

Located in the state of Goias, in Brazil, is the Chapada Dos Veadeiros National Park. A park that ages up to 1.8 billion years, yet discovered and established as a national park only in 1961 by President Juscelino Kubitscheck. Due to its brimming beauty, the park has been listed as one of the World Natural Heritage Sights by UNESCO in 2001. The park is an abode to innumerable species of flora and fauna, waterfalls and landscapes and therefore makes you one with nature and forget all your gadgets for the time being (except your cameras, they are important to capture the moment). 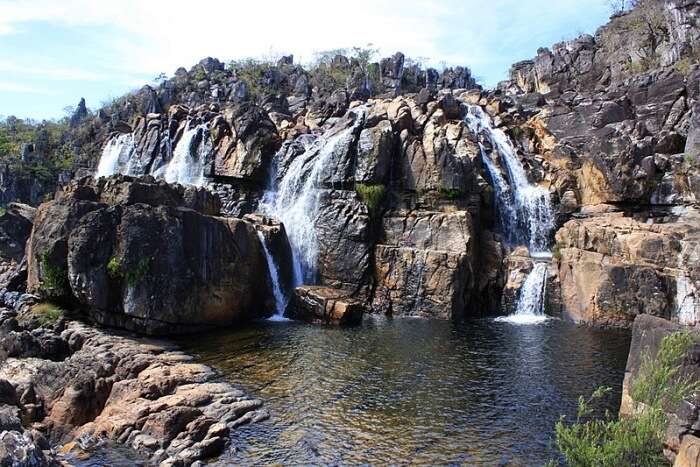 Once upon time, this area gave people around the world the gold rush, as it was a flourishing gold mine around the 18th century. And it was during this time when slavery was at its peak. However, with the mines soon disappearing, some clans escaped from the grip of slavery and sustained their nativity over the years. You may find many of these native and tribal communities such as the Quilombos and other such Kalunga communities, who with the idea of preserving their nativity and culture, engage with the tourists in the most welcoming way and give them a taste of originality.
Also, to make things more interesting, NASA has stated that Chapada is earth’s brightest point as seen by space because it lies on a bed of crystal quartz and reflects like a mirror. Spooky as it is, rumor has it that Chapada has had many frequent guest appearances by the foreigners such as the aliens.

Must Read: 10 Brazil Theme Parks For An Enthralling & Reviving Holiday With Your Loved Ones! 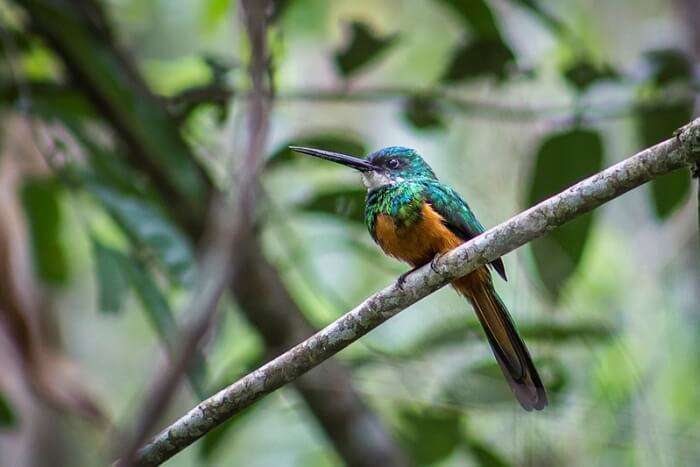 Things To Do In Chapada Dos Veadeiros National Park 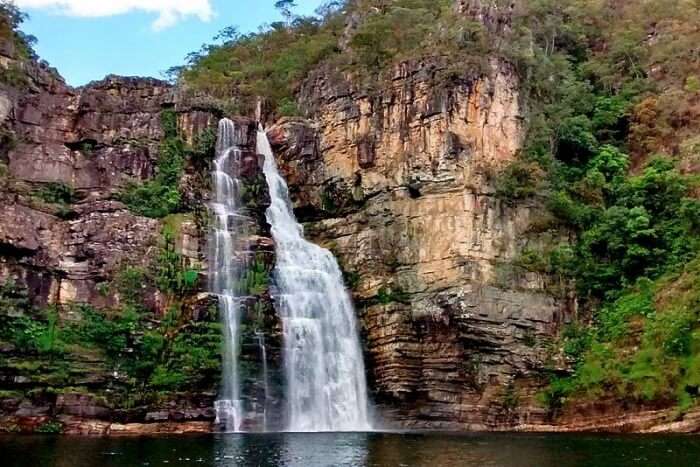 These parks and sanctuaries have always been a hub for activities such as trekking and hiking. With so much variety and diversity all around, the park promises to indulge its travelers into wondrous hikes. But for the hearts that ask for more, there are many agencies that take up treks during the day to make sure you have completely seeped in all the evident essences of the park. The trek will keep you busy and will offer quite a lot of places to visit around this wildlife hotspot. 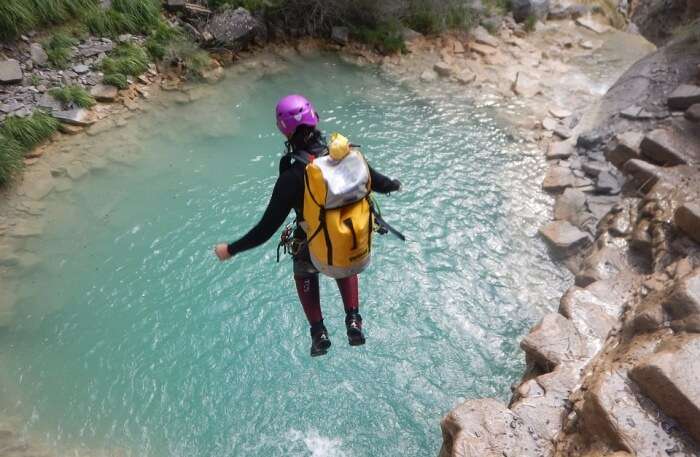 Love heights? If you do, the option of canyoning in the park is open. Quite a lot of agencies take up these activities inside the park and awaken the primate beings within you. However, to know the others, you need to do your homework. With many wells around, along with a private property, one can enjoy these pristine scapes on foot or on their cycles. On the other hand, for camp lovers, there are many camps in and around the parks which keep you still and amazed throughout the night.

Planning your holiday but confused about where to go? These travel stories help you find your best trip ever! 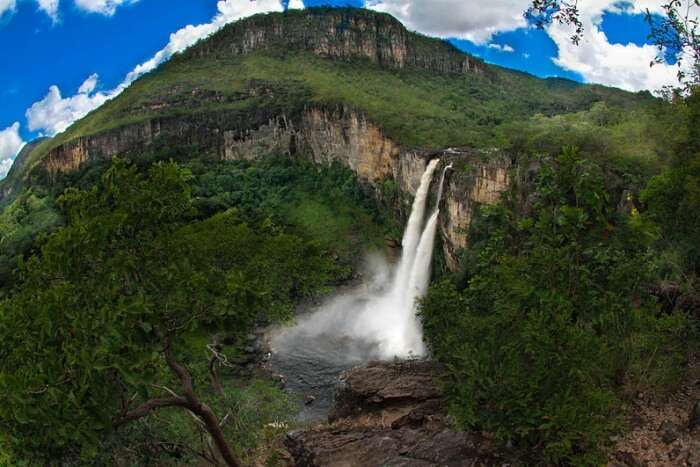 One of the most famous waterfalls in the park is Loquinhas waterfall which has been lauded for its utmost beauty. Reaching out to these waterfalls will be a cakewalk for those who have a knack for adventure and a good spatial sense. 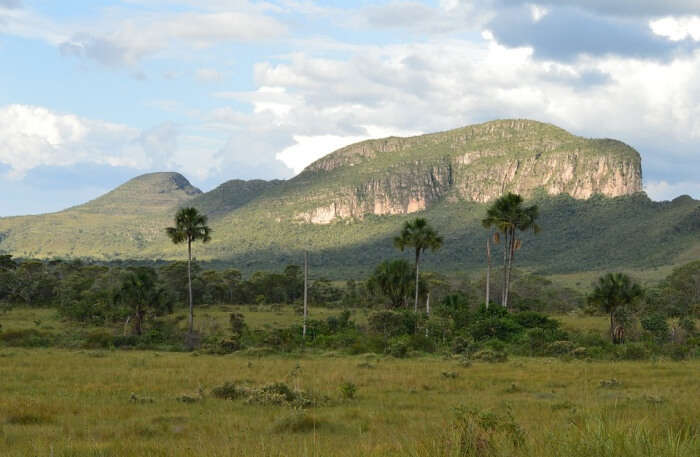 Being in the heart of a tropical land, the Chapada Dos Veadeiros weather is semi-arid, tropical and hot and therefore sunblock creams and hats are much advisable. The Park is shut down during the monsoons between December to February. However, it still rains almost every day and going near the waterfalls during these times is not recommended as it can be dangerous. After May, the clouds close their taps, leaving the lands almost deserted, but fit to travel. The best time to march would be between June and July as the probability of rains is low and water in the waterfalls is in abundance.

How To Get To Chapada Dos Veadeiros National Park

Image Source
The main gateway to the park is from the city of Alto Paraiso de Goias. Other places where you can sneak in from are Brasilia and Goiania.

By Air: There are no direct flights to Chapada but one can always fly down to Brasilia and then travel on land to any of the gateway routes

By Car: The roads leading to the park are not in their best shape. However, those who like the rough terrains and the jeep rides can always take up this option. BR-020 and the G0-118 roads access you to the park, taking you through the cities of Formosa, Sao Gabriel, and Sao Joao D’Alianca. G0-327 is another access that takes you to Sao Jorge village, which is the main entrance to the national park.

By Bus: Many buses depart from Brasília to Alto Paraíso. But there’s only one bus a day at 6 pm from Rodoviária Alto Parais that gets you to Sao Jorge.
After reaching the Sao Jorge village, the national village is at a distance of 300-400 meters which has to be accessed on foot.

Suggested Read: 8 Best Homestays In Brazil That Are All About Terrific Location, Comfort, And Hospitality

Where To Stay In Chapada Dos Veadeiros National Park 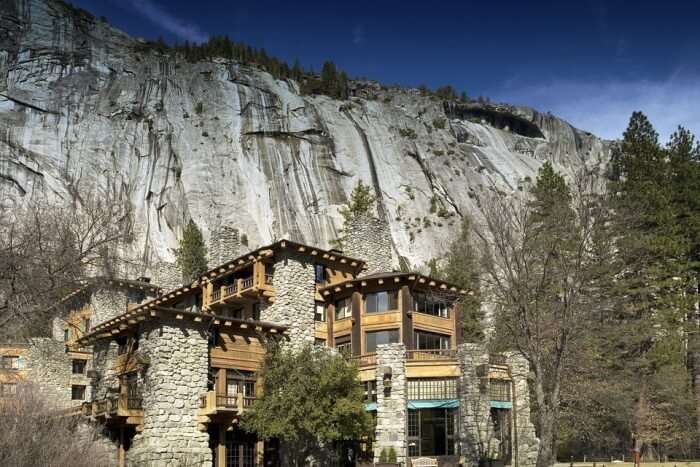 The park is in close vicinity to the villages of Sao Jorge and Alto Paraiso. So to rest your tired souls or soles after the adventure trip, but still being one with the beauty of wildlife, these places are quite accessible. However, they may not be like your atypical top-notch hotels and resorts. Being within and near the premises of the park, these places believe in keeping it a bit low so that they do not disturb the wildlife around them. So don’t be shocked and dulled if you don’t find illumination after a particular time.

Further Read: Add These Diverse Landscapes To Your List Of Top Places To Visit In Brazil

With this we come to the end of our guide to Chapada Dos Veadeiros National Park in Brazil comes to end. While we can certainly share all that we know about it, the real experience can only be enjoyed live. Equipped with this amazing guide, you will know what to see when here. So, don’t forget to pay this park a visit on your next trip to Brazil.

Looking To Book A Holiday Package?

Subscribe to Bullet Train In India: Here’s How It’s Going To Change Our Train Travel